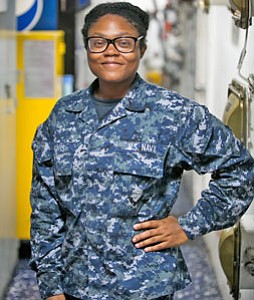 Yokosuka, Japan — A Baltimore native and 2004 Chesapeake High School graduate is serving in the U.S. Navy aboard the guided missile cruiser, USS Chancellorsville.

Seaman Alexis Davis is a quartermaster aboard the forward deployed Ticonderoga-class guided missile cruiser operating out of Yokosuka, Japan. Chancellorsville is one of three cruisers forward deployed in Yokosuka.

A Navy quartermaster is responsible for working on the bridge with the captain to help plot the course ensuring the safe navigation of the entire ship.

“Growing up I learned to go after what you want no matter what is," said Davis. "If you want it bad enough you can definitely make it happen.”

"Our alliance is rooted in shared interests and shared values," said Adm. Harry Harris, Commander, U. S. Pacific Command. "It's not hyperbole to say that the entire world has benefited from the U.S.-Japan alliance. While our alliance helped stabilize the region after the Second World War, it also enabled the Japanese people to bring about an era of unprecedented economic growth. And for the last six decades, our Soldiers, Sailors, Airmen, Marines and Coast Guardsmen have worked side by side with the Japan Self Defense Force to protect and advance peace and freedom."

Approximately 300 men and women serve aboard the ship. Their jobs are highly specialized and keep each part of the cruiser running smoothly, according to Navy officials. They do everything from maintaining gas turbine engines and operating the highly sophisticated Aegis weapons system to driving the ship and operating small boats.

Forward-deployed sailors are crucial to the success of the global Navy mission and earn high praise from their leaders.

“I have two older brothers that currently serve in the Navy,” said Davis. “Seeing the opportunity that they have influenced me to join myself. I like that I can say I am serving our country— it makes me very proud.”

Sailors serving abroad in Japan are highly motivated, and quickly adapt to changing conditions, according to Navy officials.

“Serving in the Navy means ultimately putting someone else’s needs ahead of my own,” added Davis.

A Navy cruiser is a multi-mission ship that can operate independently or as part of a larger group of ships at sea. The ship is equipped with a vertical launching system, tomahawk missiles, torpedoes, guns and Phalanx close-in weapons systems.

Sailors play a vital role in the overall military mission around the world.

"The U.S.-Japan alliance remains the cornerstone for peace and stability in the Indo-Asia-Pacific region," said Harris.