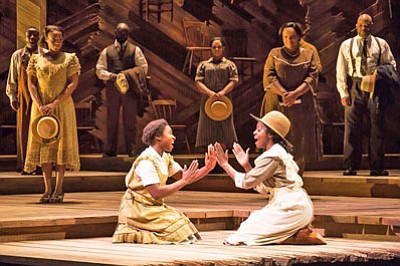 The Hippodrome Theatre at the France-Merrick Performing Arts Center is located at 12 N Eutaw St in Baltimore City.

Based on the Alice Walker’s Pulitzer Prize-winning novel and the Warner Bros./Amblin Entertainment motion picture, The Color Purple is adapted for the stage by Tony- and Pulitzer-winner Marsha Norman with music and lyrics by Brenda Russell, Allee Willis and Stephen Bray.

“I am so excited about coming to Baltimore,” said Stewart. “We are kicking-off the tour there, and it’s going to be great. I am proud to be a part of this show. I am encouraging everyone to come out and give us the opportunity to tell the same beautiful story in a different way.”

The revival of The Color Purple opened to great acclaim in summer 2013 at London’s Menier Chocolate Factory, followed by a Broadway bow on November 10, 2015 at the Bernard B. Jacobs Theatre. The Color Purple went on to win two 2016 Tony Awards, including Best Revival of a Musical, two Drama Desk Awards, including Outstanding Revival of a Musical, the 2017 Grammy Award® for Best Musical Theater Album and a Daytime Emmy®.

The Color Purple played 483 performances on Broadway, closing on January 8, 2017.

The revived show will visit more than 30 cities in its first year on tour. Following the Baltimore performance, the next stop for the tour will be The Fox Theatre in Atlanta, GA from October 24, 2017 through October 29, 2017. Other tour stops include Pittsburgh, PA; Boston, MA; Philadelphia, Pa; New Orleans, LA; Miami, FL; and Lincoln, NE.

“I am so proud to be touring across the country as one of the leading ladies,” said Stewart. “Shug Avery is the ‘It Girl’ Her name is in everyone’s mouth. Women can’t stand her, and men adore her. She is always looked at from the outside, but not for who she is on the inside. Shug Avery has a grand personality. She also has heartache that she is not proud of. She begins to have heart-to-heart moments with Celie, and together they heal one another.”

Stewart made her Broadway debut in the Tony and Grammy award-winning revival of The Color Purple (Olivia/Church Lady). She talked about her journey to Broadway and beyond.

“I did some performing in my church growing up,” she recalled. “In my early 20s, I did a lot of background vocals in community theater in Chicago. One day, I auditioned for a woman by the name of June McClean, who did faith-based musicals. She wanted me to read lines, but I wanted to sing. She told me to read those lines or to have a nice day. I did it and got bit by the acting bug. I never looked back.”

She added, “When I first started with this show, I was ‘Olivia’. It was humbling for me because I didn’t have any solo vocal lines. But I humbled myself, and said ‘God, this is the part you gave me, and I am going to do my very best.’ I focused myself and told the story from my perspective. And now, I am Shug Avery. You never know who is watching you. This has been an incredible journey, and I am really grateful.”

Tickets for The Color Purple may be purchased online at Ticketmaster.com, BaltimoreHippodrome.com, www.ColorPurple.com, by calling 800-982-ARTS, or at the Hippodrome Box Office. Discounted group orders of 10 or more may be placed by calling 443-703-2401 or contact Andrew Springer at Andrew.Springer@broadwayacrossamerica.com