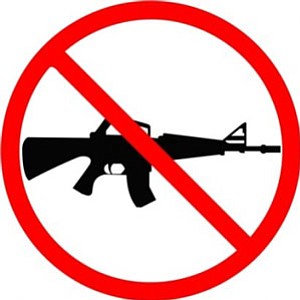 New Jersey’s Assault Weapons Ban is a good basis for the feasibility of a renewed national ban. Readers interested in learning more or getting involved in such an effort are urged to visit peacecoalition.org and click the Ceasefire NJ icon on the right.

Princeton, NJ — Our thoughts and prayers go out to the nearly 600 victims and their families of the largest mass shooting in US history last Sunday night in Las Vegas. The mass carnage made that city into what can only be described as a war zone. But our response needs to include more than prayers and moments of silence. We need to act to prevent more mass shootings, which are now occurring at an average of more than one per day.

The weapons of choice for such mass shootings are known as assault weapons. They were designed for the battlefield, which is the only place they should be allowed. They can rapidly fire bullets as fast as the shooter can pull the trigger. They were easily, adapted by the shooter to become automatic weapons in which a single pull of the trigger can spray bullets with no pause.

The hopeful news in taking on such a monumental but urgent challenge is that New Jersey has banned such weapons since 1991, and they were banned nationally from 1994-2004. Tragically, the national ban had a sunset clause after ten years, so it automatically expired when then President George W. Bush refused to seek its renewal.

New Jersey’s Assault Weapons Ban is a good basis for the feasibility of a renewed national ban. In 1993, after the NRA had helped elect an anti-assault-weapons ban majority in the NJ legislature in 1991, large majorities voted to rescind New Jersey’s Ban. Then Governor Florio vetoed the rescission, and a vote to over-ride that veto easily succeeded in the NJ Assembly.

Three weeks later, a vote was scheduled in the NJ Senate. We in Ceasefire NJ mobilized intensively in the faith community and elsewhere. Many of the 70 percent of New Jerseyans who wanted to keep the ban urgently contacted their NJ Senator.

What followed was the closest thing I’ve ever seen to a legislative miracle: not a single NJ Senator voted to rescind the ban! When the Senator who represented our district, who supported the NRA, was asked why he voted to keep the ban, he said it was because he got 2,000 phone calls and 90 percent urged keeping the ban.

The fact that we were successful in breaking the NRA’s stranglehold in New Jersey at least partly inspired the successful effort the next year to pass the National Assault Weapons Ban. Despite that fact that, unlike the New Jersey Ban, that included a grandfather clause, reputable studies showed that the National Ban resulted in a nearly 2/3 reduction in shootings with assault weapons.

We can seek to pass a National Assault Weapons Ban again. We need to press to have it introduced and voted on before the 2018 Congressional elections. In the 2006 midterms, the Coalition for Peace Action, of which Ceasefire NJ is a Project, helped make the Iraq War a litmus test issue, and the majority of those elected were opposed to that war.

Readers interested in learning more or getting involved in such an effort are urged to visit peacecoalition.org and click the Ceasefire NJ icon on the right.

Reverend Robert Moore is Executive Director of the Princeton-based Coalition for Peace Action, of which Ceasefire NJ is a Project.