The American flag is soaked in black blood 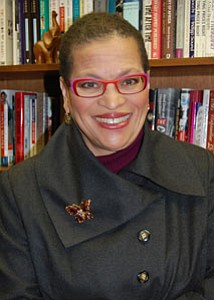 I am not sure why the national anthem and the so-called American flag are part of our nation’s sports pageantry. Before 2009, while the national anthem was played, sports gladiators were not required to suit up, stand up, and put their hands to their hearts; and why should they? The song that is sung is an insult to people of color. When I hear “the land of the free and the home of the brave,” I think, “the land of the thief and the home of the slave.” The Department of Defense paid the National Football League (seriously?) to promote a fake sense of cultural hegemony, and to spread the false notion that we are all on the same page when it comes to patriotism.

There are those who have a story to tell about so-called disrespect to the “American flag,” the same American flag that is drenched in blood. Black men went to fight in World War I and came back to this country and were lynched, because they refused to yield the sidewalk to white people. What flag did they serve under, and why should we celebrate it? Why do disingenuous fools, including “Mr. 45,” chide NFL owners with strangely coded language, suggesting a lack of loyalty? Where is the loyalty to the black men and women who supported a country that would not support them? The paradox of loyalty is that African Americans love a country that does not love us. We pledge the flag, drenched in blood, because we want something better.

This protest is more, though, than Colin Kaepernick. This protest is about police brutality. This is a protest about the fake-Jake way some would bond us together, linking arms and elbows, trying to make a point. There is no point beyond the fact that young, Black men, who play football, baseball, and basketball see their brothers and cousins on their knees, legs and arms splayed, forced to the ground by oppressive police forces. The professional athletes freely kneel, because others knelt when they were forced to, because they were not free.

We can fly this flag all we want to, we can sing melodious songs about “the star spangled banner,” but the flag we fly in the name of sports is a flag that is drenched in blood. Players weren’t “encouraged” to stand at attention during the national anthem until 2009, when the Department of Defense paid money to make it happen. I’d prefer for my tax dollars to be spent more wisely. I’d prefer that some of that money went to washing the blood out of the flag.

Julianne Malveaux is an author, economist and founder of Economic Education. Her latest book “Are We Better Off? Race, Obama and Public Policy” is available at Amazon.com and at www.juliannemalveaux.com. Follow Dr. Malveaux on Twitter @drjlastword.