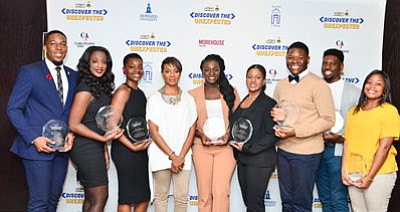 The National Newspaper Publishers Association (NNPA) and Chevrolet recently recognized the achievements of eight students from Historically Black Colleges and Universities (HBCUs) in Atlanta and Washington, D.C. that participated in the 2017 Discover The Unexpected Journalism Fellowship program.

The eight fellows were recently rewarded for their intrepid, diligent work in the Chevrolet-backed program that provides students from HBCUs scholarships and summer internships at NNPA member, black-owned newspapers.

The aspiring journalists and media professionals worked with The Washington Informer, The Atlanta Voice, The Carolinian and The Louisiana Weekly to create print, digital and social media content for the publications.

“This is a joyous occasion,” said hip-hop pioneer MC Lyte, the national spokesperson for the DTU journalism program and the master of ceremonies for the award reception held at the Renaissance Hotel in Washington, D.C.

Dr. Benjamin F. Chavis, Jr., the president and CEO of the NNPA, a trade group that represents over 200 black-owned media companies, said that it’s vital that the black community, especially black publishers, educate young people about the the importance of the Black Press.

“We have a responsibility of raising a new generation of freedom fighters and we have, over the past year, discovered the unexpected,” said Chavis, noting that the 190 year-old Black Press has enjoyed a partnership with General

Motors, the automakers behind the Chevrolet brand, which has lasted more than 40 years.

NNPA Chairman Dorothy Leavell told the recipients how proud she was of their efforts and stressed the importance of the Black Press and noted how vital young journalists are to its mission.

“We need to create a space for them to tell their stories,” Leavell said.

But, the day belonged to the up and coming journalists.

“Being part of the DTU fellowship program taught me a great deal about social media and journalism,” Fisher said. “Breaking news, catastrophes…will be shown all over the world and with this power, we have a responsibility to uplift our communities.”

One of Fisher’s most memorable stories for The Atlanta Voice was an interview with a sea lion trainer, after a video of a 700-pound sea lion pulling a little girl into the water off a pier in Vancouver, British Columbia went viral.

“I learned authenticity can go hand-in-hand with passion,” said Kelsey Jones, who received a lot of attention for her Atlanta Voice pieces on West End development near downtown Atlanta.

Noni Marshall and Alexa Imani Spencer both received the State of the Union Award at the reception for their work covering politics and other issues for The Washington Informer.