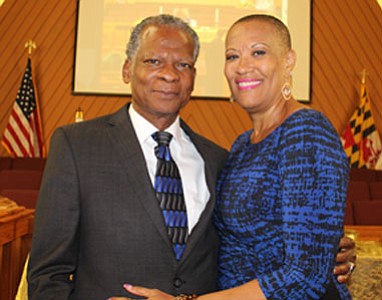 One of Maryland’s oldest black-based congregations will celebrate 175 years of consecutive service during a special gala on Saturday, October 21, 2017 at the BWI Hilton Hotel located at 1739 West Nursery Road in Linthicum Heights, Maryland. The event dubbed “Come Feel The Spirit and Share The Love,” begins at 7 p.m.

The emcee and host for the evening is Ernestine Yvonne Jones, the voice of Gospel Grace Brunch WEAA 88.9-FM at Morgan State University.

In addition to being a first-cousin to Pastor McClurkin, Minister McClurkin is a renowned recording artist and Minister of Music at St. Mark United Methodist Church. Last June, Minister McClurkin released his latest CD project entitled “Music in the Air.” The debut single from CD is "Rejoice."

St. Mark’s Pastor Herbert W. Watson Jr., noted that the theme for the gala is "Love Matters." Having served at the church for more than 20 years, Pastor Watson says he is cognizant that today's church must continue to have a relevant presence not only with its current members but with potential members in the community as well.

While his church's congregation is of a traditional African-American base, Pastor Watson says it's a fact that Anne Arundel County demographics confirm that while the black population has not decreased, other ethnicities have grown resulting in an overall decrease in black population percentages.

"In the midst of the church's historical longevity, it's pertinent to develop a mission of inclusiveness," he said. "To remain and sustain. It's now about what do we need to do to attract some of these people who are near-by. Our neighbors in our community— newcomers who

reside in the many new housing communities near our [church]. Another question is, how do we engage the younger people [and] people with young families?"

A native of Summerton, S.C., Pastor Watson migrated to Baltimore as a youth with his parents. He is the middle-child of five siblings. After graduating from Baltimore's Polytechnic High School, Pastor Watson initially had his sights on becoming an engineer. After being "called to the ministry," he matriculated to Western Maryland College (now

McDaniel College), where he earned his Master's of Divinity degree. He is also a graduate of Garrett– Evangelical Theological Seminary, a graduate school of theology of The United Methodist Church located in Evanston, Illinois. Pastor Watson, now 65, has 40 years of ministerial experience.

Pastor Watson proudly notes that he is St. Mark's "longest-serving pastor, at this point, with my 21 years."

The current temple was constructed 50 years ago in 1967, according to its cornerstone. St. Mark is part of the Baltimore-Washington Conference of the United Methodist Church. Pastor Watson served at Christ United Methodist of East Baltimore prior to coming to St. Mark UMC in July 1996.