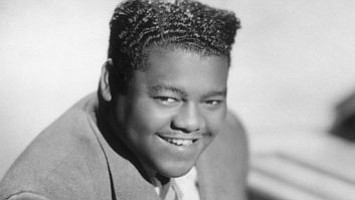 Domino passed away due to natural causes, according to Mark Bone, chief investigator with the Jefferson Parish Medical Examiner's office in Louisiana. He was 89.

With producer and arranger Dave Bartholomew, Domino cut a string of songs in the 1950s and early '60s that helped establish his hometown of New Orleans as a rock 'n' roll hotbed and made him one of the music's leading figures.

Starting in 1955, Domino was a regular on the national pop charts with songs that quickly became classics. Among the titles: "Ain't That a Shame" -- Domino's first crossover hit, which was watered down in a higher-charting version by Pat Boone -- "I'm Walkin'," "I'm Ready," "Valley of Tears," "I Want to Walk You Home" and "Walking to New Orleans." He sold more records than any 1950s figure except Elvis Presley, according to Rolling Stone.

His version of "Blueberry Hill," a song written in 1940, topped out at No. 2 on the Billboard charts and remains Domino's highest-charting record.

Most of his hits were characterized by midtempo rhythms and Domino's distinctive triplet-based piano style, in which he hammered chords in groups of three in rollicking, melodic fashion. The arrangements usually included a saxophone solo and a lead guitar line that echoed the melody.

The style was widely imitated. McCartney, a big Domino fan, wrote the Beatles song "Lady Madonna" in emulation of the pianist's work. (Domino returned the favor on his 1968 comeback album, "Fats Is Back," by covering the tune.) McCartney never grew out of his Domino fascination: Thirty years later, he did a version of the 1920s tune "Coquette" on his 1999 album "Run Devil Run" that was closely based on Domino's 1958 recording.

Newman, deeply influenced by New Orleans music in general, often seemed to channeling Domino's sound -- if not his smiling attitude -- in such songs as "Mama Told Me Not to Come" and "Back on My Feet Again."

"I was so influenced by Fats Domino that it's still hard for me to write a song that's not a New Orleans shuffle," Newman told The New York Times in 2008. He wrote the horn arrangements for "Fats Is Back."

Domino covered Newman, too, with a recording of "Have You Seen My Baby."

Domino's string of hits ended rather abruptly in the early '60s with a change of labels, from Imperial to ABC-Paramount. The latter forced him to record in Nashville, and the different atmosphere produced just one hit, a cover of the standard "Red Sails in the Sunset." But the good-natured Domino continued to tour and earn royalties, allowing him to live a comfortable lifestyle -- in New Orleans, of course, where his pink Cadillac could often be seen outside his Ninth Ward house.

When Hurricane Katrina struck in 2005, there was early concern that Domino, who had decided to stay in the Crescent City, had been killed by the storm. Someone even spray-painted "R.I.P. Fats -- You will be missed" on his house.

However, he and his family had been rescued by a Coast Guard helicopter. His estate wasn't as fortunate: "We lost everything," he said at the time.

Some of his belongings were replaced, including his gold records and a National Medal of Arts he'd been awarded in 1998 (from President Bill Clinton). His white Steinway was refurbished by the Louisiana Music Foundation, which put it on display in the French Quarter in 2013.

Domino remained a steadfast part of the New Orleans scene. He played a sold-out show at Tipitina's nightclub in 2007 and appeared in an episode of the TV show "Treme" in 2012.

Domino was inducted into the Rock and Roll Hall of Fame in 1986.