“Sparkle and Soul” Piano and String Concert in Annapolis 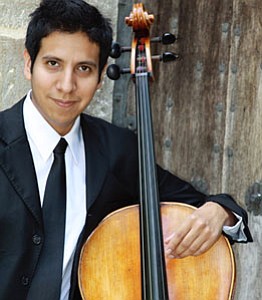 On Friday, November 3, 2017, Dr. Alan Saucedo of Trio Ponce (formerly the Saucedo Trio) will join Brian Ganz for an evening of Chamber Music, dubbed the Sparkle and Soul at the Unitarian Universalist Church of Annapolis located at 333 Dubois Road in Annapolis at 8 p.m. Tickets available at the door. courtesy Photo

ANNAPOLIS — On Friday, November 3, 2017, pianist Brian Ganz will be joined by Trio Ponce, formerly the Alan Saucedo Trio, which includes Alan Saucedo on cello; Cynthia Saucedo on violin; and Marjory Serrano on violin for an evening of Chamber Music at the Unitarian Universalist Church of Annapolis (UUCA) located at 333 Dubois Road in Annapolis.

The concert is part of a continuing monthly series at the Unitarian Universalist Church of Annapolis now in its fourth year. Rachmaninoff’s soulful Trio Élégiaque and Beethoven’s sparkling Trio in E-flat major, Op.1, No. 1 will be featured, among other compositions.

Brian Ganz is considered one of the leading pianists of his generation, noted for his mastery of Chopin. He has performed locally and worldwide and is well known for annual solo performances at Strathmore Music Center.

Dr. Alan Saucedo has won several international music competitions and performed in Brazil, Japan, Mexico, Paraguay, Portugal, Spain, and the U.S., including appearances at the Smithsonian, the Kennedy Center, and the White House.

Cynthia Saucedo, a native of Mexico, is a member of the Vitali String Quartet that has performed at the White House and at venues in Mexico and in several U.S. states. She is on the faculty at Shenandoah Conservatory Arts Academy in Winchester, Virginia.

Dr. Marjory Serrano, also on violin, has performance credentials in Venezuela and the U.S., including Carnegie Hall and the Kennedy Center, and also has extensive experience as a concertmaster.

Ganz and the Trio Ponce first performed together in the Middleburg Concert Series in southwest Loudoun County, Virginia. Ganz describes the experience as having “absolutely magical chemistry both personally and musically.”

For the concert, which is their second collaboration, Ganz and Trio Ponce have chosen the title “Sparkle and Soul” to feature two exceptional compositions for strings and piano.

“My favorite trio for piano, violin, and cello has always been the very first one Beethoven composed and published: the Trio Op.1, No.1 in E-flat major. I used to go to sleep at night listening to it. It is without argument the greatest opus 1 ever composed,” said Ganz. “From the very first opening arpeggios in the piano, it sparkles with a brilliant energy and is full of beautiful and substantive ideas.”

The Rachmaninoff, by contrast, is “one of the saddest and most soulful works you will ever hear. Its beauty and emotional power can be shattering.” Ganz says the Beethoven number is the “sparkle” in our concert title; the Rachmaninoff is the “soul.”