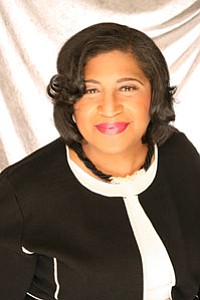 Iris Leigh Barnes, curator of the Lillie Carroll Jackson Civil Rights Museum in Baltimore has been appointed to the Maryland Commission on African American History and Culture for a four-year term. Courtesy Photo

BALTIMORE — Governor Larry Hogan has appointed Iris Leigh Barnes of Havre de Grace to the Maryland Commission on African American History and Culture. She was sworn in as a commissioner for a four-year term on Friday, October 20, 2017.

The goal of the commission— part of the Governor’s Office of Community Initiatives— is to educate residents and visitors about the significance and impact of the African American experience in Maryland.

“It is an honor and a pleasure to work with the historical and cultural institutions in Maryland to help them advance their missions to preserve the rich history of our state," Barnes said. "Much of what happened in Maryland, and particularly in Harford County, reverberated across the country and had an impact on regional and national events.

"African American history provides incredible stories that illustrate the tenacity and power of the human spirit, and that history is important for everyone to know in order to truly understand our country and its culture. That’s what makes this work on the commission important, and I am so honored to be a part of it.”

She is also the curator of the Lillie Carroll Jackson Civil Rights Museum in Baltimore, owned by Morgan State University. The museum tells the story of many Marylanders including Thurgood Marshall, Clarence M. Mitchell, Jr., Juanita Jackson Mitchell and Margaret Carey and their work to eliminate racial inequality.

Barnes is the recipient of several national and local awards including being named an inaugural Interpretation Fellow at the Smithsonian National Museum of African American History and Culture and the National Association of Interpreters; a two-time Diversity Fellow for the National Trust for Historical Preservation; and a Wing Research Fellow at the Maryland Historical Society.

In addition, she was a lead member of the Hays-Heighe House and Hosanna School Museum teams that sponsored the “Faces of Freedom: The Upper Chesapeake, Maryland, and Beyond” initiative, which was awarded a Maryland Preservation Award by the Maryland Historical Trust.