Ravens defense needs to stop the run in the coming weeks 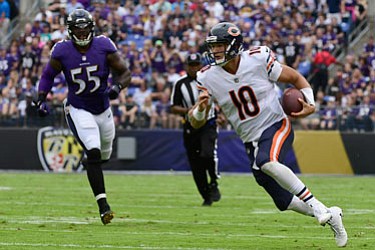 Chicago Bears quartetback Mitchell Trubisky eludes Ravens outside linebacker Terrell Suggs during the game in week 6 in the NFL on Sunday, October 15, 2016 at M&T Bank Stadium in Baltimore. Courtesy Photo/NFL.com

At the start of the 2017 season, many media outlets felt that the Ravens defense would be one of the best in the NFL. However, that has not been the case seven weeks into the season.

Baltimore's defense prides itself on stopping the run. Last week, Minnesota Vikings running back Latavius Murray ripped off 118 yards rushing in the 24-17 win over the Ravens.

Defensive coordinator Dean Pees was asked about the big plays they gave up in the rushing game on Sunday.

"One time we are in a zone with just a four-man front. Two guys kind of got out of their gap and did not play it, and the ball broke," Pees said. "Then on the second one— on the touchdown— we actually ran a blitz. What it was— that is why I say I think we are pressing sometimes.

"One of the guys tried to kind of go a little farther than what he has to go on the blitz in the gap, and he went a little farther than he needed to, and all of a sudden they hit that gap. Those are one of those, where, sometimes, if they run it the other way it doesn't show up. But they ran it right where we made a mistake. And we made a mistake."

Outside linebacker Terrell Suggs bristled when the media mentioned living up to the hype. He thinks Baltimore can still get things back in order on defense.

"Hype, huh? Shots fired. But no, we had Brandon [Williams] out a couple of times; we lost Brent Urban," Suggs said. "But we still can be historic. We still can be magical. So, [forget] hype. We know who we are, and we know what we're about. Now, we've just got to tighten the screws a little bit. We just have to stop the leakage. We're not hitting the panic button just yet. We're going to be alright."

In week five, the Raiders only scored 17 points against Baltimore. The main problem is the run defense. Safeties Eric Weddle and Tony Jefferson feel they need to play better but Pees thinks it's more of a team effort.

"They run the show back there. They have high aspirations, and they are very accountable guys," Pees said. "They are two very good pros. We are struggling a bit right now. We have to go back to just letting it go and playing football. We all are pressing. We have to do a good job as coaches and we have to really stress the fundamentals."

The next few games on the schedule feature teams that like to run the ball. It will be a good opportunity for the coaching staff and players to redeem themselves from a run defense perspective. Stay tuned.