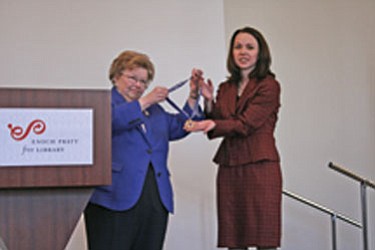 Senator Barbara Mikulski presents the Medal of Freedom to the audience with the help of Pratt Library President & CEO Heidi Daniel (Top right) Artist rendering of The Senator Barbara A. Mikulski Room Photos by Dennis Roberts

BALTIMORE — Senator Barbara A. Mikulski will loan her Presidential Medal of Freedom to the Enoch Pratt Free Library to be displayed in a new exhibit inside the renovated Central Library.

A presentation of Senator Mikulski’s Medal of Freedom was held on the morning of Thursday, October 19, 2017 at the Pratt Central Library.

“The Enoch Pratt has played such an important role in my life. It helped to educate and inspire me— as it has for so many. It is open to everyone, free of charge,” said Senator Mikulski. “I want to give back to an institution that has given so much to me and to our community. These historic artifacts are from key moments in my career. I hope they inspire others to learn and to serve.”

The longest serving female in the history of the U.S. Congress, Senator Mikulski was awarded the Presidential Medal of Freedom, the country’s highest civilian award in 2016 by President Barack Obama who called her the “Lioness of Capitol Hill.”

“It is such an honor that Senator Mikulski has chosen to share such valuable pieces of history with the Pratt Library,” said Library President & CEO Heidi Daniel. “This new exhibit will tell the story of a passionate leader, fierce advocator and champion of human rights who dedicated her life to serving the people Maryland. We hope it inspires a whole new generation of leaders.”

The Pratt Library exhibit, set to open in 2019, will feature dozens of artifacts loaned by Senator Mikulski from her career.