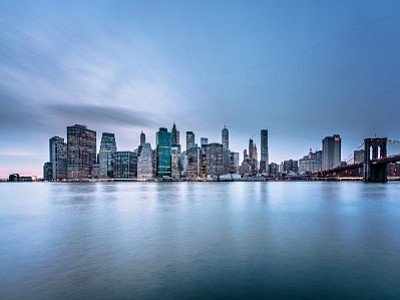 Even though Manhattan is an island, it's easy to get caught up in the whirlwind of the interior of the city and forget that it is, in fact, a waterfront city.

If you're looking for a change of pace from the somewhat chaotic and slightly intimidating drinking and dining scene in New York City, you don't have to go farther than the waterfronts to find an entirely new experience.

Restaurateurs Alex and Miles Pincus have changed the way New Yorkers drink and eat by tapping into the city's waterfronts and creating scenes where you can enjoy the tranquility of being on the water.

Throughout the 17th and 18th centuries, Manhattan was surrounded by oyster barges that, as Alex explains, "were basically saloons on the water where you could go for a beer and oysters." Inspired by this concept, the brothers set out to bring the city's drinking and dining scene back to the waterfronts.

It begins with a schooner

It all started with a 72-year-old codfish schooner that would eventually become a restaurant and oyster bar called Grand Banks. The old sailors' bunks became the kitchen, and the deck was outfitted with two nautical-themed bars and a dining area. Clearly, the concept worked: Even on a weeknight, you may find yourself waiting in a line that extends down the pier.

The nautical-inspired cocktail list includes a wide variety of liquors and flavors and the prices are pretty standard for New York nightlife, around $15 a drink. If you're a tequila drinker, try the Fracas (it includes pineapple and lime along with a smoky mezcal, which creates an interesting contrast). On a brutally hot day, cool off with The Fisher's Country Club (gin, grapefruit, and lemon) or a Skipper Key (rose mixed with strawberry, cucumber and lemon).

Aside from the oyster selection that changes daily, Grand Banks also is known for offering one of the best lobster rolls in Manhattan -- they've truly mastered the mayo-to-lobster ratio.

Other standouts include sea scallops served with bacon and tomato compote, Montauk sea bream ceviche and tomato-and-watermelon salad seasoned with mint, basil and coconut oil. Everything is great to share --and even better when accompanied by a side order of the seaweed salt french fries.

The best things to do in New York City outside Manhattan

But the best thing to do with a successful concept is iterate it. Alex and Miles Pincus are continuing to expand New York City's waterfront drinking and dining options, opening two new hotspots just this summer: Island Oyster on Governors Island and Pilot in Brooklyn Bridge Park.

Besides being a way to enjoy the New York waterfront, Island Oyster also holds the distinction of being the first restaurant on Governors Island.

While there are a few other venues that offer a waterfront dining experience such as The Frying Pan and Pig Beach, Island Oyster is unique because in addition to great food and drinks, it offers a true island experience. Since it is a ferry ride away from Manhattan, it fosters a much more relaxed vibe and is an all-day destination (perfect for a staycation for New Yorkers or a day trip for visitors).

Alex Pincus, who describes that their business model has been "to do what we think is cool and feels good," has transformed a former Lenape Native American Indian hunting and fishing ground into a 32,000 square foot venue and unusual dining destination with the help of Eric Cheong (designer of the Ace Hotel Properties).

The gorgeous space boasts two 50-foot bars and tables so close to the water you may even find yourself in a splash zone; along with recreation areas (including activities such as corn hole and ping pong) and a coffee shop.

This location was also an oyster bed, and the brothers liked the idea of bringing the oysters back to where they came from. Alex describes Island Oyster as a place where you feel relaxed and totally alone while technically inside one of the largest cities in the world. Island Oyster is set to be open until October, and should definitely be on your NYC hit list.

Meanwhile, if you want to try out the Grand Banks concept experience from Brooklyn, the Pincuses have transformed Pilot, a schooner built in 1924, into a bar and restaurant docked on Brooklyn Bridge Park's Pier 6. Pilot has all the same charm as Grand Banks and dawns many special details such as the mosaic-laid tiles in the bathroom. Once built to be the fastest sailboat in the world, Pilot is now serving up the same level of Instagram-worthy food and drinks as Grand Banks against panoramic views of downtown Manhattan.

Two dishes that particularly stand out from Pilot's menu are the Calmar a la Plancha and the Softshell Crab Po'boy. The first is fresh grilled Montauk squid served over a bed of arugula with avocadoes and tomatoes. The Softshell Crab Po'boy (inspired by brothers' New Orleans roots) might take you all day to eat.

And in case you haven't noticed the theme, Pilot also has nautical-themed cocktails: the Life at Sea (vodka, mint, blackberries and lime juice) and the Spirit Animal (light rum, Aperol, coconut, lemon and strawberry).

Like a love of boats, hospitality runs in the Pincus family. Miles and Alex grew up in New Orleans, where their father ran well known restaurants restaurants and hotels such as Royal Orleans. Their father is currently the CEO/GM of Hotel Monteleone, which is also the location of the famous Carousel Bar. (The oyster bar at Monteleone in the '80s and '90s even featured an oyster bar in the shape of a boat...hmm, inspiration?)

While Alex was studying architecture at Columbia and Miles began working on a sailboat, they started spending more time out on the water and realized how largely untapped the city's waterfronts were. Their first venture was a sailing school and summer camp on the Upper West Side called Atlantic Yachting that is still in operation today..

Island Oyster and Pilot, like Grand Banks before them, are redefining New York's dining scene by offering true waterfront city experiences. Whether you live in the city or you're just visiting, all of these venues transport you out of Manhattan's chaos and allow you to appreciate the city's waterways.