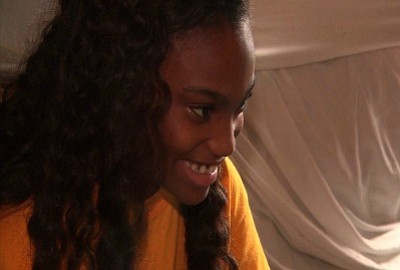 Fourteen-year-old Tyler Frank used Siri to help call the Coast Guard and get herself, and her family, rescued from Hurricane Harvey floodwaters. CNN

Stranded outside in the rising waters of Hurricane Harvey, feverish and in great pain, 14-year-old Tyler Frank tried desperately to think of ways to get herself and her family to safety.

And indeed, Siri was smart enough. With one inquiry to the Apple personal assistant -- "Siri, call the Coast Guard" -- Tyler got her whole family rescued after two days out in the storm.

It happened in the nick of time. Tyler has a genetic disorder called sickle cell anemia. When Harvey hit, she suffered a sickle cell crisis, as her stiff and oddly shaped red blood cells clogged up her blood vessels and prevented oxygen from reaching parts of her body.

The pain of a sickle cell crisis can be worse than the pain of childbirth, according to the National Institutes of Health.

Trauma or exposure to cold can trigger a crisis, according to Dr. Titilope Fasipe, Tyler's hematologist at Texas Children's Hospital. Tyler suffered both.

In the early morning hours of August 27, Tyler, her mother and three of her brothers awoke to water in their home up to Tyler's chest. Soon, the water was nearly over her head.

Shivering in the cold, Tyler had only a towel to protect her. Then the towel got wet.

Connecting to the Coast Guard

That's when she thought of asking Siri to connect her to the Coast Guard.

She gave the man on the other end of the line her family's location and explained that she was sick and scared for her life.

The man told Tyler she was a brave "guy."

One of the rescuers descended from the helicopter and spoke with her. She said he asked whether anyone was sick. By this time, Tyler had a 103-degree fever.

"I told him yes, I have a child with sickle cell, and she's very sick, and I need you all to take her," Frank said.

She said the rescuer told her he was taking only elderly people, and he would come back for others.

"She was standing right there in front of him. And he turned around and got on the helicopter and left," Frank said.

As she watched the helicopter take off, Tyler said, she felt abandoned.

"Why did they leave when we really need them?" she said. "It made me cry."

In a statement, the Coast Guard told CNN, "Coast Guard first responders were faced with an overwhelming request for assistance due to Hurricane Harvey. On-scene rescue crews made determinations based upon emergent factors (i.e. immediate, life-threatening situations) and the conditions faced on the scene."