John Harbaugh and Ravens set to kick off 2017 NFL season 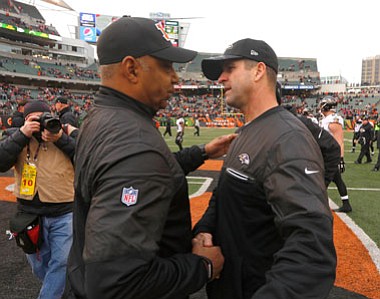 Baltimore Ravens head coach John Harbaugh shakes hands with Bengals head coach Marvin Lewis after the final game of the 2016 season. The Ravens and the Bengals kick off the 2017 NFL season on Sunday, September 10 in Cincinnati. Courtesy Photo/NFL.com

The Baltimore Ravens kick off the 2017 season with a showdown on the road against their AFC North divisional rival, the Cincinnati Bengals on Sunday, September 10, 2017 in Cincinnati.

Having recently signed a one-year contract extension, head coach John Harbaugh would like to get back to the winning ways that marked most of his career in Baltimore.

The Ravens have to overcome some shortcomings in the secondary after osing second-year cornerback Tavon Young for the season due to injury. Baltimore invested a first round pick in cornerback Marlon Humphrey. He figures to be the starter opposite of veteran Jimmy Smith.

A.J. Green and Andy Dalton have been able to victimize the Ravens in the past and the duo will look to do the same on Sunday.

Baltimore welcomes back quarterback Joe Flacco after he missed all of training camp. Harbaugh isn't worried about Flacco's ability to step right in and line up under center.

"He has worked really hard on it. I do believe he is in good shape. I would not say football shape because he has not played football," Harbaugh said during a recent press conference. "He is in really good shape as far as his conditioning, his cardiovascular and his strength and those kinds of things. Those are things that we will just have to wait and see when he comes out to practice. I will say he has started to throw.

"He has started to move around and do the football stuff in the last two days. He is moving towards practice, and when the docs clear him – which we don’t know [the] date when it is going to happen right now; we believe it is going to be real soon and in time to prepare for Cincinnati— then he will be out there."

Over the last two games against the Bengals, Flacco has passed for 501 yards but also threw two interceptions. New wide receiver Jeremy Maclin gives Flacco a proven player to target in the passing game.

The two will have to work on getting their timing right since they've never teamed up before— it will take time for them to get fully in sync. Once it does happen, Baltimore's passing game is expected to go to the next level.

The Ravens have only won one of the last four games against the Bengals. With the division being primarily a three-team race between the Ravens, Bengals and Pittsburgh Steelers, it is very important for Baltimore to start the season with a win in Cincinnati.