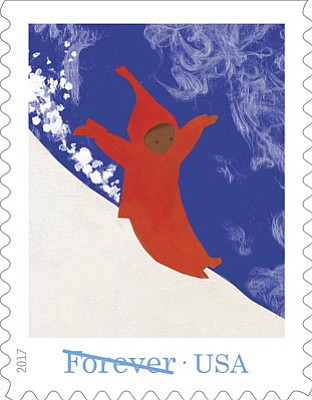 WASHINGTON — The U.S. Postal Service showcases Ezra Jack Keats’ most beloved story, The Snowy Day. Written and illustrated by the celebrated children’s author, it was one of the first prominent 20th-century picture books centered on an African-American child. Each of the four new stamps in this 20-stamp booklet features a different illustration of main character Peter exploring and playing in his neighborhood while wearing his iconic red snowsuit. The images include Peter forming a snowball; sliding down a mountain of snow; making a snow angel; and leaving footprints in the snow. Art director Antonio Alcaláof Alexandria, VA, designed the stamps. The stamps may be pre-ordered in early Sept. for delivery shortly after the Oct. 4 issuance at usps.com/shop. 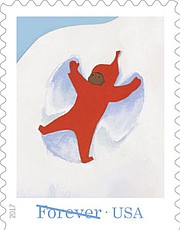 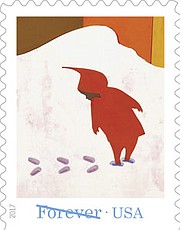 The Snowy Day - Peter leaving footprints in the snow.