Following in the "Ten Bears" legacy of Morgan State University 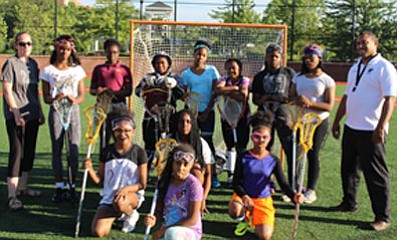 Notably, the University of Maryland's men and women lacrosse teams both won NCAA championships in 2017.

On that note, even though it may appear that lacrosse is a sport perhaps uncommon to the black experience, in Maryland the sport has been a staple among African-Americans for many years – including 50 years ago when Morgan State University first fielded a successful men’s team affectionately known as the "Ten Bears.”

The attraction to lacrosse has long been a major draw to Maryland youth both black and white, while young black athletes in other parts of the nation continue their expected focus on basketball, football, track or perhaps soccer and baseball. Primarily in central Maryland, black youths have for many years immersed themselves in the alternative sport known as lacrosse.

According to CCYL executive director, Artemis "Artie" West, lacrosse is one of the oldest team sports in North America with origins in the Native American culture. West says she was first introduced to the sport by her parents at the age of seven. While growing up in suburban Towson, she attended Loch Raven High School where she became a star player— helping her school win two regional titles, and achieving at least one undefeated season.

West was initially recruited to play lacrosse for Howard University but she decided to play for Towson University, where she enjoyed a successful athletic career.

At age 31, West stays busy ensuring that minority children are introduced to the lacrosse experience. As CCYL's primary administrator, she believes it's vital to assure girls and boys stay committed to the game.

"It's a way of getting the kids out of the city. They meet new friends while staying active and fit. It also enhances their academics and opportunities to attend four-year colleges," West said.

Founded in 2008 by Doug Gansler, the former attorney general of Maryland, to benefit Baltimore's inner-city youth, CCYL now consists of 600 children between the ages of four and 15. All coaches are unpaid volunteers.

Another local figure pivotal to Baltimore’s inner-city youth participation in lacrosse, is Donnie Brown. The Baltimore native and former member of the famed Morgan State team was introduced to the game as a youngster. After starring on the Baltimore City College team, he went on to become a star player on the Morgan State team. Now 58, Brown remains connected to the sport and serves on CCYL board of directors and is considered as the “Godfather of Black Lacrosse” in Baltimore by West.

Meanwhile, the Baltimore Gators, an all-girls unit, which participates independently under the CCYL banner is made up of girls, ages nine to 14. The team competes with other Baltimore area girls’ teams. Organized by West in 2009, the Gators are now coached by George Roycroft.

"We're not as experienced as the teams we face, but our girls have so much heart. I'm very proud of them," said Roycoft, the coach for the past seven years.

West says the sport has been played at Ivy League colleges for decades, and still has the reputation of being the "sport of the privileged." She also noted the historical relevance of Baltimore-based Morgan State University, as the only lacrosse team sanctioned to play NCAA-level lacrosse at an HBCU (historically black college university).

The Morgan team's exploits are recounted in the book "Ten Bears," and the story was once being considered for a major motion picture production. In 2011, ESPN produced a Black History Month feature showcasing the Morgan State lacrosse experience.