Model with vitiligo redefines what it means to be beautiful 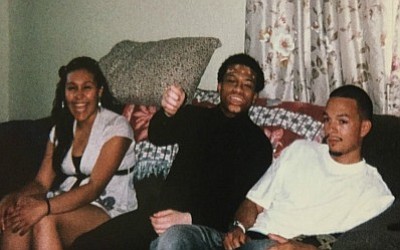 Curtis McDaniel, center, didn't used to like having his picture taken. Now, the 22-year-old from Bordentown, New Jersey, is bringing a bold new face to the modeling world. Courtesy Curtis McDaniel

Curtis McDaniel didn't used to like having his picture taken. Now, the 22-year-old from Bordentown, New Jersey, is bringing a bold new face to the modeling world.

"It was something that just fell into my lap," he said.

Growing up wasn't always easy for McDaniel. When he was 11, he found a white spot on his skin that wouldn't go away.

"I didn't know what it was, and it wasn't coming off. I told my mom, and she made a dermatology appointment," he said.

McDaniel was diagnosed with vitiligo, a disorder that causes patches of his skin to lose color. He's the only one in his family who has it.

"I like being black, so I was freaked out," he remembered. "I didn't like it at all."

Kids at school made comments as more and more white speckles appeared on his skin.

"They used to call me zebra, burnt lips, giraffe, Michael Jackson," he said. "I got into a few fights because of it. I got kicked out of class a lot."

McDaniel said he went from being a happy kid to being angry and upset.

"The hardest part about it was when you see something changing in your life and you have no control over it. Seeing my skin and all these new spots are coming in, and I had no way to stop it. That's what hurt me the most."

McDaniel tried to hide the spots on his skin with baggy clothes and makeup. He started to lose his self-confidence.

"When people said I was ugly, I actually believed that," he said. "There were times when I was in my room when I was going through a lot, and I just wanted to commit suicide."

But at 16, a talk with his dad helped set him on a new path.

"My father, he was struggling with certain addictions. He sat me down one day," McDaniel said. "He was like, 'No, I want you to be better than me. ... When you grow up, never put your hand on a woman. Never drink. Never smoke. Never do drugs. And above all things, put God first.' "

McDaniel started going to church regularly. He found strength through religion and started to see his skin as a gift, not a curse. He stopped wearing makeup and started to love himself for who he was.

"That's when everything changed. I started to establish that self-confidence," he said. "Before, when people used to want to take pictures with me, I would be like 'no.' But now, I don't mind taking pictures."

McDaniel was discovered as a model after uploading a selfie to social media in 2015.

"People say I don't smile too much when I take pictures, so I was like 'Let me take a selfie of me smiling.' "

He posted the picture on Instagram before going to class.

"When I was leaving school, I looked at my phone, and I see my Instagram is just going crazy," he said. "I got home and started searching, and a supermodel had posted my picture."

After the picture went viral, photographers started reaching out to McDaniel to set up photo shoots.

His newfound fame led to an audition for the MTV documentary series "True Life." McDaniel appeared on the show this year.

"I wanted my story to be known because maybe a kid who is just like me could hear my story," he said.

McDaniel enrolled in a community college, and now he's a student at Rutgers University, studying urban planning and design.

He has also spoken about his vitiligo at schools and churches, spreading a message of self-love and perseverance.

"This is who I am. This was part of my purpose," he said. "I wouldn't be where I am now if it wasn't for my vitiligo."