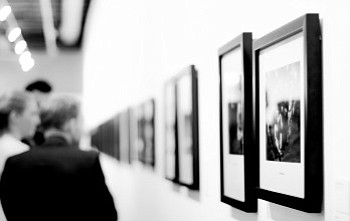 A new piece of art by Banksy was unveiled in London on Monday in a protest targeting one of the world's largest arms fairs.

The work will be displayed for a week at Art the Arms Fair, an exhibition set up to oppose the Defence Systems & Equipment International (DSEi) exhibition being held in the British capital this week.

The artist's new work, "Civilian Drone Strike," is created with childlike strokes -- but its intention is anything but playful.

A horrified looking stick figure stands next to a dog and a burning home. Three drones circle above.

At the biennial arms fair, 1,600 companies from around the globe will tout military hardware to delegates from countries including Algeria, Bahrain, Qatar, Pakistan and Saudi Arabia.

Banksy, the elusive street artist, is well known for tackling complex socio-political concepts in pieces of art for the masses. His latest work is a pointed criticism of the human cost of weapons of war.

Sam Walton, an Art the Arms Fair organizer said, "Banksy is apparently offering a critique of the military industrial complex by deliberately destroying a rather nice child's drawing."

"'Civilian Drone Strike' is such a powerful statement against everything that events like the DSEI arms fair stand for."

On Friday, the piece will be auctioned off with proceeds donated to the Campaign Against Arms Trade and the human rights organization Reprieve.

A number of high profile artists and activists have contributed work to the Art the Arms Fair exhibition, including Peter Kennard, Guerilla Girls and Darren Cullen.