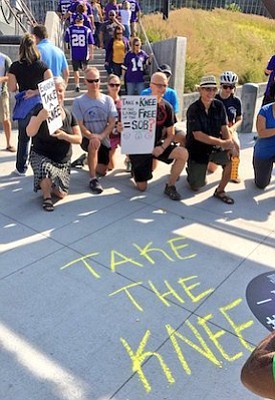 Protesters stand outside US Bank Stadium in Minneapolis to take a knee in solidarity with the team. Smiley Hill

The Dallas Cowboys and Arizona Cardinals on Monday night locked arms with teammates in response to President Donald Trump's caustic comments. But it was the scripture reference on the hand of the woman belting out the National Anthem that resonated with many.

The scripture, written on the hand of pop star Jordin Sparks, is Proverbs 31: 8-9: "Speak up for those who cannot speak for themselves, for the rights of all who are destitute. Speak up and judge fairly; defend the rights of the poor and needy." Many took to social media to praise Sparks.

The Cowboys' and Cardinals' display came after a weekend in which Trump slammed the National Football League, and players and coaches for protesting during the anthem. The players responded Sunday by kneeling, locking elbows or remaining in the locker room during the pregame performance of "The Star-Spangled Banner."

Members of the Cowboys and Cardinals stood in separate locations for the anthem. The teams had talked about a collective display of unity but did not do so, said ESPN sideline reporter Lisa Salters. No member of either team was shown in the televised broadcast kneeling or sitting.

Before Sparks' rendition, the Cowboys, including owner Jerry Jones, knelt in the middle of the field. Boos could be heard from the crowd in Glendale, Arizona.

The players' demonstration was intended as a statement for equality and a representation of unity, but they wanted to separate that message from the National Anthem, according to Salters, who spoke with Jones' daughter, Charlotte Jones Anderson, the team's executive vice president.

As the Cardinals players, coaches and owners gathered in the end zone to honor the flag and members of the armed forces, public address announcer Jim Barnett invited the crowd to "unite as well and do the same with your fellow fans, regardless of jersey color."

'An individual right of an American'

Earlier, Cardinals head coach Bruce Arians said it's up to players to decide whether to stand or kneel during the anthem. "That is an individual right of an American," he said.

Cowboys coach Jason Garrett was reticent when questioned by reporters.

"We have an approach that we believe in, and no real comment beyond that," he said.

They kept grilling him. Will the players do anything? Has there been a discussion?

"No," Garrett said, drawing an awkward silence as reporters waited for him to elaborate. He didn't.

Another journalist asked: Did Garrett not have an opinion on the protests, or was he simply reluctant to share it?

"I just don't think it's in anyone's best interests for me to comment on that," he said.

With that, the press conference moved on to football matters. It's worth noting though that the man who signs Garrett's paychecks has been vocal about the anthem protests.

Last year, when then-San Francisco 49ers quarterback Colin Kaepernick saw only a modicum of support for the anthem protests he's pioneered, Cowboys owner Jones told a Fort Worth radio station that such demonstrations were "really disappointing."