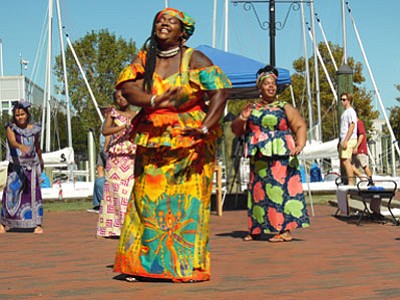 Jihavon Hendricks of Keur Khaleyi African Dance Company performs at the 28th Annual Kunta Kinte Heritage Festival honoring the legacy of a slave named Kunta Kinte and in celebration African-American history on Saturday, September 23, 2017 in Annapolis. The dance company from Baltimore’s mission is to reach multi-generations and multi-ethnicities to give them information about the rich culture of the African diaspora. Hendricks says that everyone in the village can dance. Attendees also joined the company to celebrate Saturday’s festivities. Over 5,000 attendees made their way to Annapolis for this year’s Kunta Kinte Heritage Festival. Photo: Andrea Blackstone

Annapolis is a well-known tourist destination in Maryland where out-of-towners can be found browsing in boutiques, strolling on brick-topped sidewalks leading to the United States Naval Academy or navigating through the narrow streets along City Dock admiring the yachts and powerboats.

Maryland’s state capital is also known for its exciting festivals and events. The 28th Annual Kunta Kinte Heritage Festival was held Saturday, September 23, 2017 and was no exception to the excitement many look forward to experiencing in Annapolis.

The 28th Annual Kunta Kinte Heritage Festival honors the legacy of Kunta Kinte, one of 98 slaves brought to Annapolis aboard the ship Lord Ligonier in 1767 and the main character in Alex Haley's book, Roots. The festival also highlights and celebrates African-American history which continues to play an equally memorable part of exploring the culture of Annapolis. 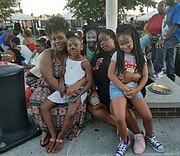 Just around the corner from the place where slaves were brought to Annapolis in chains, families, friends, and solo travelers made their way toward sounds of African drum beats, the smell of freshly cooked fish and ribs, and an assortment of festival sights. Live animals and face painting gained attention from young children. Everything from colorful African clothing, books, empowering t-shirts, colorful art, crafts, and jewelry filled tables that were lined up neatly in rows.

As the sun began to heat up a small yet busy town, 52 African Americans from New York City, N.Y. stepped off a long tour bus to partake in the festivities. Janifer P. Wilson— founder of Sisters Uptown Bookstore— organized the excursion. Wilson owns the only black-owned bookstore in Harlem. The unique community resource center for the exchange of information and ideas has been in business for 17 years. Wilson heard about the 28th Annual Kunta Kinte Heritage Festival and wanted to support it. Her group visited the National Museum of African American History and Culture, before heading to the area where Kunta Kinte was said to have arrived on the Lord Ligonier ship in 1767.

“The energy of the festival is profound. We love gathering with our people in the spirit of our ancestor. We have a rich culture and once we embrace the history of ancestors and world history, we will be freedom,” Wilson said while standing in Susan Campbell Park. “Knowledge is the key to our freedom.”

Visitors such as Selina Lokko and Maikan Kone stumbled upon this year’s festival. While looking at colorful jewelry, Kone said that history is right up her alley. The women who are like sisters traveled from Va. and planned to see Carr’s Beach in Annapolis.

After looking at townhouses in the place where African-Americans once enjoyed performances of up-and-coming entertainers in the era of segregation, Lokko and Kone found their second destination. The friends described the event as fantastic. Lokko and Kone remarked that they would put it on their calendar for next year and spread the word out about it.

“It’s just that huge umbilical cord, that thread among all of us. It’s just really one world, one people, one love,” Kone said, referring to like-minded people who embraced history at the festival. “I just love it.”

Jan F. Lee, who served as festival chair of the 28th Annual Kunta Kinte Heritage Festival, explained that the number of festival attendees, volunteers, and vendors all increased this year. She noted that over 5,000 attendees made their way to Annapolis for the cultural event.

The planning committee for this year’s event consisted of eight volunteers and 30-40 people volunteered on the day of the festival. Approximately 80 vendors participated. Lee affirmed that that this year’s goals were met.

“A few of the main goals were to have the community stage for more engaging and educational entertainment, to have more volunteers, and to have more vendors, which we accomplished. With the support of Anne Arundel Community College, we were able to have the community stage. We received a positive response from vendors— a significant number having vended with the festival in years past that wanted to participate again. And we added a few members to the committee and received more support from people that wanted to volunteer,” Lee said after the festival. “Next, we want to continue to grow and add more to the festival so that people will learn and enjoy. We want to continue to improve the festival experience.”