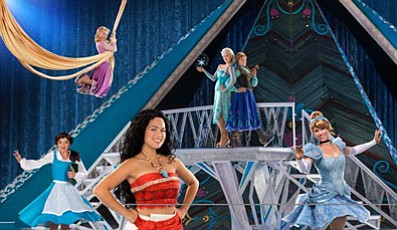 Throughout their lifetime, the young and the young at heart, are constantly encouraged to dare to dream. Through its exciting new show, Disney has brought the encouraging words to life through an exciting new show. Entitled Disney On Ice presents Dare To Dream, the breathtaking production comes to Royal Farms Arena October 11, 2017 through October 15, 2017. 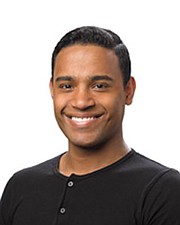 Quiesto Spieringshoek, a native of Cape Town, South Africa, is performing in the production.

Presented locally by MetroPCS, the show celebrates what’s possible as five Disney heroines spark the courage inside us all in exciting Disney fashion. Produced by Feld Entertainment, Dare to Dream features an incredible display of special effects, stunning set design and breathtaking choreography on the ice. Hosts Mickey Mouse and Minnie Mouse will take audiences on an expedition across raging seas and snow-covered mountains in this action-packed extravaganza.

“Dare to Dream is really strong in its message,” said performer Quiesto Spieringshoek, who is featured throughout the show. “It embraces kids and their dreams. It encourages them to reach a little farther and to put in the extra effort. They see these characters aspire to do something. They watch these characters overcome the obstacles they face and make friends along the way. From the beginning to end, the show has a very strong message. It is uplifting, and makes a child feel, that if these characters can do it, they can do it to.”

The show will allow audiences to see how far Moana will go in an epic adventure with demigod, Maui, to save her island and discover her true identity. They can join Belle as she fearlessly befriends the enchanted castle staff and reveals the Beast’s gentleness. Children and adults can experience Anna’s devotion to her sister, Elsa, on her life-changing journey to stop an eternal winter.

The show features edge-of-your-seat explorations with Rapunzel, Flynn Ryder, Cinderella and friends from around the Disney Kingdom as they find the heart and determination to overcome obstacles and make their dreams come true.

The show is very classic, but very modern,” said Spieringshoek referring to the classic and newer Disney characters. “I am still star-struck by Donald Duck and Goofy,” he added with a laugh.

Spieringshoek is a native of Cape Town, South Africa, and has been with Feld Entertainment since 2011. He has been skating since the age of 11, and was encouraged to try his ‘feet’ at ice-skating by his best friend.

“She was already on this journey, and took me along with her,” he said. “She transitioned from a competitive skating career to a professional skating career. She took athleticism and arts and combined them. For me, this journey has been something of a marathon story. It has been amazing.”

The 29-year-old is encouraging everyone to come see the show.

“This show conveys to never think less of yourself,” said Spieringshoek, noting that he is looking forward to returning to Baltimore. “When you look deeper into each story, some of these characters initially could not understand their abilities and power. Each story and their characters have a unique message, which makes the show so great.”

He added, “The show teaches a very valuable lesson about being happy with who you are and that anything is possible.”

Feld Entertainment® is the worldwide leader in producing and presenting live touring family entertainment experiences that uplift the human spirit and bring people together.

Tickets start at $20 and can be purchased at all Ticketmaster outlets via charge, by phone at 1-800-745-3000, via www.ticketmaster.com, and at the Royal Farms Arena box office.