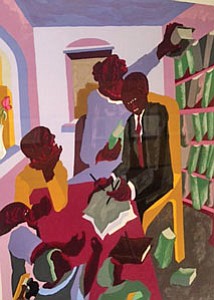 In a fitting birthday tribute, the Reginald F. Lewis Museum of Maryland African American History & Culture presents “Maryland Collects: Jacob Lawrence.” The exhibition consists of 50 fine art prints and three artist books by artist Jacob Lawrence from collections in and around Maryland. The exhibition opened on September 9, 2017, and will be on display through January 7, 2018. The Reginald F. Lewis Museum is located at 830 East Pratt Street in Baltimore.

Lawrence, one of the best-known artists of the 20th century, was a painter, storyteller, visionary, poet, social commentator and educator, renowned for his portrayals of African American life, most notably, in Harlem. Lawrence, who passed away in 2000, would have turned 100 on September 7.

“This started out as new signature series, which was a show we do every three or five years,” said Charles E. Bethea, Chief Curator/Director of Collections & Exhibitions for the Reginald F. Lewis Museum. “We decided to start off our new series by honoring the 100th birthday of Jacob Lawrence, who was born on September 7, 1917. The planning for this started 10 months ago, and was curated in-house.”

He added, “We want people to enjoy the show anesthetically, and hopefully delve deeper into the pieces themselves. With the work Jacob Lawrence was doing, he really wanted to educate the masses, and to contribute to the African American history not readily taught in school.”

The exhibition was assembled from local collectors, and features prints reflecting the vivid colors and simplicity of form seen in Lawrence’s earlier paintings. The collection offers a visual overview of Lawrence, who is credited as being one of the greatest narrative story painters of the 20th century.

“Lawrence set out to inspire and uplift in a tangible way,” said Bethea. “There are 50 prints here from 19 collectors. Each of these pieces tells a story. Some have narratives on them that give insight into his thought and creative process.”

For more than 50 years, Lawrence transferred pieces of himself and his experiences onto his paintings, prints, murals, and even costume designs. A keen observer of Harlem during its stimulating renaissance and devastating Great Depression, Lawrence used the city to express the character and identity of African American urban life.

His compositions captured historical events of African American history not taught in school, as well as unheralded scenes of modern urban reality. He was the first Black artist to be represented by a New York Gallery (1941) and the recipient of numerous honors and awards during his lifetime. His work is included in public and private collections around the world.

“Lawrence’s works reflect his experiences,” said Jacqueline Copeland, director of Education & Visitor Services for the Reginald F. Lewis Museum. “He absorbed all of those experiences and put it in his art work. He was a prolific artist, storyteller and griot. He had a spirit of generosity, and was generous with his art. We think anyone who comes to see this collection can relate to the pieces here. People will also be attracted to the brilliance and color in all of his works.”

She added, “He continued to produce works until his death in 2000. We have an amazing body of work on display, and people will really be wowed by what they are going to see.”

The Reginald F. Lewis Museum will also host a series of programs and events in connection with the exhibition. They include: Saturday Fun: Printmaking for Kids on Saturday, September 16th at 11 a.m.; The Joy and Pain of Collecting Art later that day at 1 p.m. Jacob Lawrence Family Day on Saturday, October 7 at noon; and Dollar Day Celebrates Jacob Lawrence on Saturday, December 9 at 11 a.m. For additional events and information, call (443) 263-1800 or visit www.lewismuseum.org.