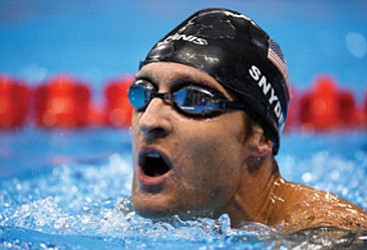 Retired Navy Lieutenant Brad Snyder is competing in the Invictus Games in Toronto in swimming, and track and field. During his deployment to Afghanistan in support of Operation Enduring Freedom, he was severely injured by IED and is completely blind. At the 2013 Paralympics in Brazil, Snyder broke a world record in swimming, a mark that had stood for over 30 years. Courtesy Photo

By Saturday, September 30, 2017, retired Navy Lieutenant Brad Snyder will know if he earned a medal from the Invictus Games in Toronto, which began on Saturday, September 23. However, with or without a medal, the veteran from Baltimore will count as a winner.

Snyder is among the 550 military competitors from 17 nations who compete across a dozen adaptive sports at the annual Invictus Games— the only international sporting event for wounded, ill and injured service members.

Created by Prince Harry and sponsored by Jaguar Land Rover, officials said the games use the power of sport to inspire recovery and support rehabilitation.

For Snyder, a multi-medal winner in swimming events at the Paralympic Games, he ’s looking forward to competing in Toronto.

“I have seen this initiative grow from the beginning, and it’s great to see what it’s become,” Snyder said. “I was able to spend a little time with Prince Harry in Colorado Springs at the Warrior Games in 2013 when the seeds for the Invictus Games were sown, and it will be a distinct honor to compete this year for the first time.”

The Olympic and Paralympic movements have been immense sources of inspiration for Snyder and being a part of them over the past five years have pushed him to expand his perception of what he is capable of.

“They have helped me to see how communities unified under common ideals that work together can be so powerful and have such a positive impact,” Snyder said.

Joe Eberhardt, the president and CEO of Jaguar Land Rover, North America, LLC, says his company proudly sponsors the games because of its ongoing commitment to supporting veterans.

“We feel strongly that it is important to support our service members from the athletic arena to the workplace,” Eberhardt said.

After six months of assault operations, Snyder suffered a severe injury by an explosion of an improvised explosive device (IED), which led to complete vision loss.

A swimmer, Snyder returned to the pool as part of his rehabilitation and eventually earned a spot on the U.S. Paralympic National Team for swimming.

He has competed in two Paralympic Games earning five gold medals and two silver medals. At the 2013 Paralympics in Brazil, Snyder broke a world record in swimming, a mark that had stood for over 30 years.

The return to the water remains a high point for Snyder.

“It wasn’t necessarily the act of swimming that was cathartic; it was returning to a mode of self-improvement, a mode where my family and friends had seen me before, and a mode where I could compete, and eventually succeed,” he said.

Military personnel are imbued with a strong sense of purpose or mission during their indoctrination and sometimes the worst part of an injury is the perception that they can no longer fulfill their duty, Snyder said.

“Duty, purpose, and mission can be restored through competition and the power of sport,” he said. “And, this can be immensely cathartic for wounded, ill and injured service members. At least, that is what my experience has shown me.”

Further, Snyder says his injuries have healed and he has adapted to a point where the consequences are not a daily consideration.

“It’s just who I am,” he said. “The U.S. has come a long way since Vietnam, and I believe that our homecoming veterans are treated very well. It’s great to be able to share this sentiment with our allies, and celebrate our service. Most often, the only time we spend with our friends abroad are in war zones and battlefields, so it will be nice to share some fun in the wonderful city of Toronto.”