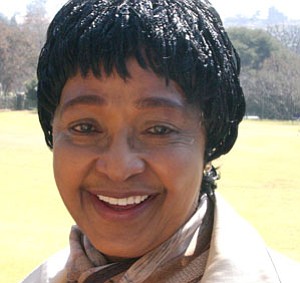 Winnie Madikizela–Mandela was a South African anti-apartheid activist and politician. Born in Bizana, South Africa, she studied social work at the Jan Hofmeyr School. In 1958, she married Nelson Mandela in Johannesburg. They remained married for 38 years and had two children together. In 1963, Mandela was imprisoned following the Rivonia Trial. Winnie became the public face of the domestic anti-apartheid movement during the 27 years of his imprisonment. She was arrested and detained by state security services on various occasions and spent several months in solitary confinement. In 1985, Mandela won the Robert F. Kennedy Human Rights Award for her human rights work in South Africa. She will always be remembered for her role in civil rights activism during apartheid in South Africa.