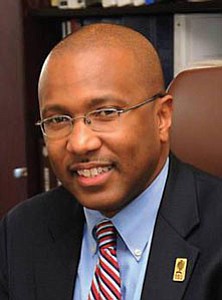 Dr. Harry L. Williams, the president and CEO of TMCF, says that engagement with Republicans and the Trump Administration is working for the HBCU community. Courtesy Photo/NNPA

A few months ago, the Thurgood Marshall College Fund (TMCF) was proud to welcome the presidents and chancellors from 30 Historically Black Colleges and Universities (HBCUs) and Predominantly Black Institutions (PBIs) to Washington, D.C. for the second annual HBCU Fly-In held in conjunction with the leadership of Senator Tim Scott (R-S.C.) and Representative Mark Walker (R-N.C.), who are both members of the very important, bipartisan HBCU Caucus.

My experience as a former HBCU president and now leader of TMCF, working on behalf of our 47 publicly-supported HBCUs, gives me a broad perspective on the federal government’s partnership with HBCUs, as delivered through this event’s multiple listening sessions and direct engagement opportunities with members of Congress and senior leadership within the Trump Administration.

Thanks to the commitment of dozens of our HBCU presidents and chancellors who attended our inaugural convening and this year’s fly-in, we’re beginning to see major developments from several federal agencies looking to increase support for HBCUs and to create more opportunities for our scholars.

Thanks to our collective advocacy, several HBCUs that were devastated by Hurricane Katrina in 2005 received total forgiveness of outstanding loans awarded for the restoration of their campuses in the hurricane’s aftermath. Southern University at New Orleans, Dillard University, Xavier University, and Tougaloo College are free of their repayment obligations on more than $300 million in federal loans, because of direct engagement with and action from this administration and congressional leadership on issues of critical importance to our HBCU’s, like this one.

We are cognizant that many lawmakers in the majority in Congress favor fiscal austerity to address budgetary issues, but in a legislative environment dominated by talks of budget cuts, critical HBCU funding lines were increased, which is a demonstrable return on our collective investment in bipartisan engagement.

Indeed, TMCF’s decision not to resist, but instead engage in a strategic way and bipartisan fashion on behalf of our nearly 300,000 HBCU students who need a voice in Congress and with the Trump Administration has borne fruit at many levels. I am optimistic that many of our presidents and chancellors departed the nation’s capital with a clearer sense of the propriety of this strategy given our mutual goals, and now having the benefit to witness the rewards of this advocacy effort. TMCF will not stop engaging with all of our federal partners, because bipartisan advocacy with the Congress and engagement with the Trump Administration is paying dividends for our nation’s HBCUs.

Dr. Harry L. Williams is the president & CEO of Thurgood Marshall College Fund (TMCF), the largest organization exclusively representing the Black College Community. Prior to joining TMCF, he spent eight years as president of Delaware State University. Follow him on Twitter at @DrHLWilliams.