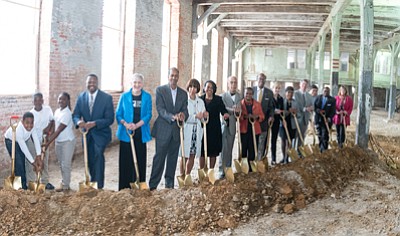 When complete, the 85,000-square-foot facility will be home to social entrepreneurs and innovators committed to solving the various challenges facing Baltimore, with a special focus on the distressed neighborhoods surrounding the Center, just north of Johns Hopkins Hospital.

Years in the making, the project is a true collaborative effort by the public, private, and nonprofit sectors, as well as community members.

The Rev. Dr. H. Walden Wilson, pastor of Israel Baptist Church, kicked off today’s celebration by highlighting how powerful teamwork has proven to be in moving the Center for Neighborhood Innovation forward. “I have come to the conclusion, we can do more together than we can separately,” said Rev. Wilson, who has led the neighborhood church for some 40 years.

CNI will be housed in the historic but long-vacant A. Hoen & Co. Lithograph Buildings, where a once-thriving printer produced everything from baseball cards to National Geographic magazines.

The chief executive of Cross Street Partners, Bill Struever, said he expects his latest undertaking to prove every bit as successful as his previous initiatives to revitalize and repurpose significant old buildings that had fallen into disrepair and disuse, such as the former manufacturing plant that currently serves as headquarters to Under Armour. “All of these [projects] have more jobs today than they did in their heydays,” he said. At Hoen, he continued, “We expect likewise.”

The CNI initiative is somewhat unusual. Unlike traditional project-based initiatives that focus on a single issue, place-based efforts such as CNI address the multiple issues presented by a single geographic area.

“All neighborhoods have assets – it’s just a matter of recognizing and investing in them,” said Karen D. Stokes, CEO of Strong City Baltimore, a nonprofit that supports community-based initiatives and which will be spearheading the CNI as the Hoen’s lead tenant. “This area of East Baltimore has suffered from decades of disinvestment, but with this project we have a chance to help turn that around.”

The myriad challenges in the communities around CNI include high crime, low property values, high unemployment and low educational attainment. For example, more than 25 percent of Collington Square’s residents are without a job, and roughly a third lack a high school diploma or GED. CNI’s tenant partners will seek to address these and other issues through individual efforts and in collaboration. The interdisciplinary group will help students and residents move step-by-step along the continuum from schooling to job training to career building.

Citing his real estate development hero, James Rouse, whose accomplishments include the creation of Columbia, Md., Struever said it is essential that the project is sustainable for the long term and that it belongs to the neighborhood. CNI will deliver on both counts, he said, explaining that the effort represents the perfect alignment of the community and the marketplace.

State Sen. Nathaniel J. McFadden said that kids used to peer through the windows of the Hoen decades ago to watch the activity inside. CNI, he said, represents another important step forward in his shared mission to put the neighborhood “back together like we found in in the 1940s and 1950s.”

“Transforming neighborhoods and communities, that’s what it’s about,” Sen. McFadden said. “Let’s get to work.”

Thanking all of the state, local, and community partners who have contributed to the project since it was first proposed in July 2014, Mayor Catherine E. Pugh said: “Let’s continue to move Baltimore forward.”

Ella Durant, who has lived in the Collington Square neighborhood for more than 60 years and has served as the community association’s president for roughly 20 years, recalled how she toured the Hoen buildings back when she was in elementary school, when it was bustling. “It’s coming alive again,” she enthused.

Also, during the groundbreaking ceremony, Hoen’s development partners presented a check for $75,000 to the Club at Collington Square, an after-school and summer program for young people in the neighborhood, operated by Strong City Baltimore.