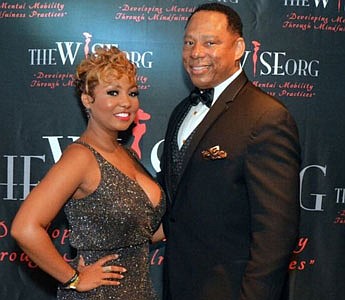 On Saturday, November 24, 2018, WISEorg, Inc., (Women’s Inspirational Self-Empowerment), held its first ever Golden Gala at The Park in Washington, D.C. where an estimated 300 people danced, ate and mingled— all in the name of supporting women struggling with mental illness.

Founded by Dr. Thomisha M. Duru, TheWISEorg, Inc. is a nonprofit organization that provides physical and mental healthcare, legal services, spiritual restoration and development, employment readiness and other services to women with mental illness at no cost.

“We received an overwhelming amount of support,” said Dr. Duru. “It was pleasantly unexpected but we were humbly grateful. We raised, close to $10,000. We have never raised that amount of money in grassroots efforts. Nearly a week later, we are still receiving donations. We hope to reach $10,000.”

Dr. Duru has had personal experience with mental illness. A tragic event caused her to slip into an abyss of depression ultimately resulting in a mental breakdown. She found her way back to mental stability and is now helping other women to do the same through TheWISEorg, which she founded in 2016.

“Thanks to the monies raised from this event, we are now able to expand our course offerings,” said Dr. Duru.

“We now have a licensed clinical social worker, and a psychologist who specializes in trauma. We were previously nable to secure that level of professionalism, but now we can.

“We can also obtain personal care items our clients need, which I previously had been paying for out of pocket. We are also able to feed more of the underserved population and offer additional resources. We will also be able to put on more Sister Circle projects, which will allow us to take women on nice professional outings like shows and restaurants.”

The event included hors d'oeuvres, dancing, and a Silent Auction. According to Dr. Duru, event sponsors and donors played a major role in the event’s success.

“The venue and food were donated by Marc Barnes, owner of The Park,” said Dr. Duru. “Carl Harper worked with me to promote the event. Guy Lambert, who is a radio personality and FOX 5 news anchor also helped with the event. They all donated their time and service. They believe in what we are doing to help women who have mental health issues and wanted to help raise money to support our cause. They helped to make all of this possible.”

Dr. Duru is a college professor and is the author of “I Suffered in Silence,” which is available for purchase on Amazon. According to Dr. Duru, the Golden Gala will become an annual event. Plans are also in the works for a mid-2019 fundraiser.

“We hope to expand or programs even more,” said Dr. Duru. “In the past we have had small numbers, but in 2019, we are hopeful to serve at minimum of 20 women. We are looking to have two cohorts, with 10 women in each cohort. If we can get them social services, we can put them back on the road to good mental health.”

She added, “We want them to realize they have the strength to do anything. Your mind is a muscle you have to exercise. But we have to have funding. We thank everyone who helped to make our Golden Gala a success.”

Dr. Duru says the next cohort will take place in the spring, and will be offered at Winning Souls Evangelistic Church in Pasadena, MD.