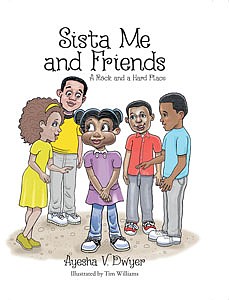 Written by Ayesha V. Dwyer and illustrated by Tim Williams, the book “Sista Me – Every Mikkel Make a Mukkel,” chronicles the fictional story of a little girl who shares her Jamaican descent through fun and adventure, and awakens readers to life on the tropical island. Sista Me is available for purchase at SistaMe.com; Amazon.com; and iTunes. Courtesy Photo

Surrounded by the Caribbean Sea, Jamaica is an island rich in history, culture and family, and the buoyancy of the music that plays in various locations and homes throughout that island nation brings life and stirs the soul, according to Ayesha V. Dwyer, a passionate storyteller who shares an adventurous tale of a young girl who lives life grounded in her Jamaican roots in her new children’s book, “Sista Me – Every Mikkel Make a Mukkel.”

“Jamaica is a lively place where seemingly the sun is forever smiling and the clouds are never dreary. This is the perfect backdrop for a children’s story,” said Dwyer, a wife and mom of two who lives in the Chicago suburb of Wadsworth.

Her illustrated hardcover book chronicles the fictional story of a little girl who shares her Jamaican descent through fun and adventure, and awakens readers to life on the tropical island.

It also shows Dwyer’s love of Jamaica, the people, the language and the culture; and even though the characters reside in the Unted States, the Jamaican influences are very apparent.

In the book, readers are taken on a journey with “Keturah,” whose nickname is “Sista Me.” There is also “Jaggy,” Keturah’s grandfather; “Auntie Merty,” her mother; “Kingston,” her brother; “Noelle,” her best friend; and host of other family members and friends.

The book weaves in cultural references, some Jamaican patois, and a glossary to help readers find the definitions of the words.

“Jaggy” counts as a central character always there to support Sista Me, as she navigates her way through childhood.

“You know young kids are full of adventure,” Dwyer said. “Sista Me is just one of those kids who will bring a smile to your face no matter what they do.”

Dwyer says she drew inspiration to write the book from her own youth.

“As an adolescent, I was quite rambunctious and facetious; a class clown to say the least. During those times, it was often the wisdom, and aphorisms of my grandfather, Joe. L. McDonald that kept me out of sticky situations,” she said. “I was inspired to write this story on account of my relationship with my grandfather. There is nothing more precious and endearing than the relationship between a child and their grandparent.”

She also says she had the pleasure of bonding and developing a close relationship with her husband’s grandfather, Jaggy, who is of Jamaican decent.

“Jaggy was a man of few words, however when he spoke, there was always a lesson to be learned,” Dwyer said.

The book’s “Jaggy,” is the main character’s confidante. He is the teacher and the hero, Dwyer said.

“Sista Me considers him her superhero. They have a very close relationship and on account that Jaggy resides with Sista Me and her family, he’s often the first person she encounters before each new adventure,” Dwyer said. “Sista Me values Jaggy’s insight, even though she may not fully appreciate it until she finds herself in another sticky situation. But, even still, Jaggy is always present when she needs him the most.”

To Dwyer, the overall importance lies in having the ability to unlock the imagination of a child, which she calls a gift.

“It’s a gift that I most cherish. I desire to inspire children to be creative and utilize their gifts for greatness,” Dwyer said. “My goal is to continue to write stories that will be admired and shared for many generations.”

“Sista Me – Every Mikkel Make a Mukkel” is available for purchase at SistaMe.com; Amazon.com; and iTunes.