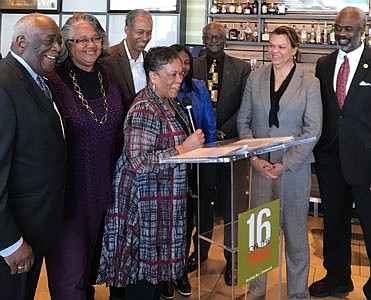 The East Baltimore Historical Library hosted Baltimore's first annual Steel Workers' Legacy Luncheon, recently at the new Marriott Residence Inn-Hopkins Campus. A cross section of people from the community were invited to the luncheon to initiate a concerted effort to chronicle the history of these citizens who, unfortunately, have never received proper recognition for their role in building and sustaining America.

A former marine and Old Town Mall Community Association president, Douglas was one of the union leaders who testified before the U.S. Congress when the voices of black steel workers were heard nationally in the mid-sixties.

Whether these men and women worked at Bethlehem Steel (Sparrows Point); ARMOCO Steel; Baltimore Smelting & Refinery (Koppers); or Eastern Stainless Steel; or whether they lived in East or West Baltimore, Highland Town, Dundalk, Sparrows Point or Turner Station— the attendees celebrated the health sacrifices these laborers made. They contributed to the USA Steel Industry becoming an industrial giant around the world, all while navigating Jim Crow policies and practices in order to provide for their families.

Many of these men left southern farms, during "The Great Migration," crossed the Mason Dixon line and began to learn new skills; while building self-sustaining enclaves within the neighborhoods there were able to settle in. They learned new skills, which would fuel not only a robust economy for our city, but also the region paving the way for hundreds of black students to enter colleges and they purchased thousands of homes throughout East Baltimore— and beyond.

Let us all remember, that during an extremely challenging period in our country's moral and political history - "They bent steel!"