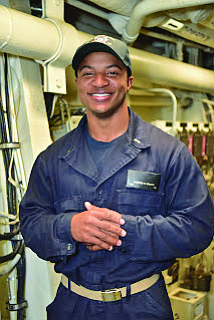 Ensign Demond Brown is an operations information division officer aboard the guided-missile destroyer operating out of San Diego.

As a Navy operations information division officer, he is responsible for 16 sailors who track surface and air contacts to assist the ship in anti-air and anti-surface warfare.

“I have a lot of pride in my hometown, being in the Navy, and the work that I do,” Brown said.

More than 300 sailors serve aboard the ship, and their jobs are highly specialized, requiring both dedication and skill. The jobs range from maintaining engines to handling weaponry along with a multitude of other assignments that keep the ship mission-ready at all times, according to Navy officials.

"The success of our Surface Force ships is measured by our ability to provide Fleet Commanders with combat naval power at sea and to project that power ashore where and when it matters," said Vice Adm. Richard A. Brown, commander, Naval Surface Forces. "It's hard work to ready ships for combat operations at sea— it takes the talent of an entire crew working well together. I'm extremely proud of the each and every surface warrior's contributions to the Navy's enduring mission of protecting and defending America, at home and around the world."

A Navy destroyer is a multi-mission ship that can operate independently or as part of a larger group of ships at sea. The ship is equipped with tomahawk missiles, torpedoes, guns and a phalanx close-in weapons system.

Brown has military ties with family members who have previously served, and he is honored to carry on the family tradition.

“My cousins joined the military, and there is a lot of pride in that they joined because of me,” Brown said.

Brown’s proudest accomplishment was earning the Officer of the Deck qualification in a short period of time.

“Serving in the Navy has made me a more disciplined person,” said Brown.

As a member of one of the U.S. Navy’s most relied-upon assets, Brown and other sailors know they are part of a legacy that will last beyond their lifetimes.

“I am proud of my service to our country and the security I help provide,” Brown said.