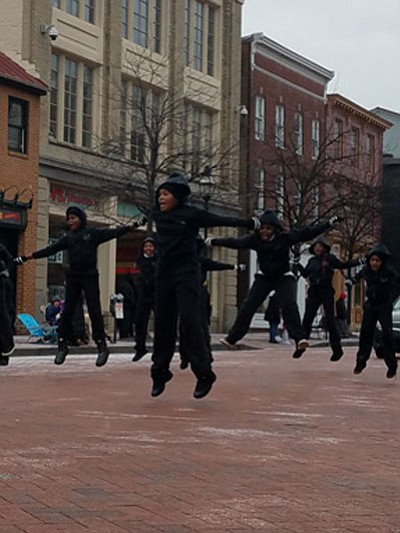 A sudden snow shower did not stop these energetic youth performers from jumping joyfully to celebrate the life and legacy of Dr. Martin Luther King, Jr. Photo by Andrea Blackstone

The celebration of King’s life and legacy was a joyous time for participants and onlookers who bundled up to pay tribute to the late activist and civil rights movement leader. Locals and individuals from across the state greeted each other with waves, hugs, and cheers as the parade’s theme, “Pushing Peace in our Homes, Communities, Nation, & World!” unfolded.

Annapolis Mayor Gavin Buckley thanked everyone who braved the cold temperatures to keep Dr. King’s dream alive by attending the parade. He remarked that is was an important time in history for people to come together. 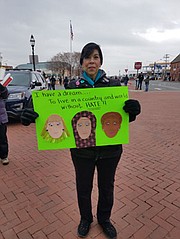 Symbols of hope were written on message-filled signs. Posters about dismantling racism to living in a world without hate were held up by diverse parade participants. The strong presence of youth who participated in the City of Annapolis’s fourth annual Dr. Martin Luther King, Jr. Parade indicated that they also wanted to acknowledge philosophies rooted in justice and equality.

Two sisters—Cassandra Wilkins and Ericka Wilkins— are among Annapolitians who are building alliances to benefit youth in Annapolis. Like-minded community leaders such as Odessa Ellis and Sandra Johnson (“Ms. Tippy”) joined them to help a group of young people participate in this year’s annual Dr. Martin Luther King, Jr. Parade.

Odessa Ellis, chairperson of the Black History Club for Annapolis High School (AHS), leads it during the school day. Ellis said that students who represented AHS during the 2018 parade have been participating since the parade began four years ago.

“We try to instill into the students at AHS, the importance of Black History, and it’s not all just about slavery, but it’s about the achievements of Black people (African-Americans) throughout the world. The club takes trips. We go to museums. We have functions like the parade today, and we have a Black History program in the month of February,” Ellis said, mentioning that an average of 20-25 students drop in for the club. “What makes me feel good about them (AHS students) coming to the club is knowing about their history. It’s open to all races.”

On the day of the parade, Johnson rode in a church van with the Wilkins sisters while passing out gloves, hats, and scarves to younger children who comprised the eclectic group. From day-to-day, Johnson leads an after school program through the Housing Authority for the City of Annapolis at Eastport’s Harbor House Recreation Center. Mentoring, homework help, activities are offered to young students who currently range from ages six to 12.

Johnson, who said she marched in the City of Annapolis’s fourth annual Dr. Martin Luther King, Jr. Parade three times, added that she enjoyed every experience. After the parade, Johnson remarked that youth she escorted learned team building and leadership skills, in addition to knowledge about King.

“They seem to enjoy it. Every year I call on them. Every year they are with me, so I love that,” Johnson said. “I tell them (youth in the program) that every day is history day for us.”