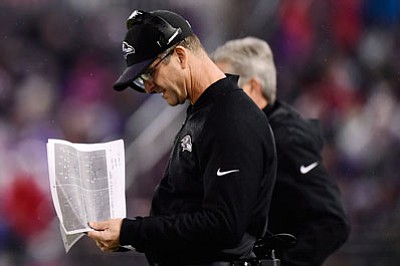 Baltimore Ravens head coach John Harbaugh has signed a one-year contract extension, keeping him under contract with the team through the 2019 season. NFL.com

BALTIMORE — The Baltimore Ravens were on the brink of making a return to the playoffs after not seeing the postseason since 2014. Unfortunately, an old friend in former defensive coordinator and current Bengals head coach returned to M&T Bank Stadium and ended any possibility of a playoff appearance— saving his job in the process.

Head coach John Harbaugh signed a one-year contract extension, keeping him under contract through the 2019 season. However, make no mistake he is under pressure to get the team back to the playoffs.

There will be a major change in the coaching staff. Defensive coordinator Dean Pees retired and will be replaced by linebackers coach Don Martindale, which will allow the defense to keep a similar scheme in place.

Heading into the offseason, there are some pieces that need to be added to fill holes in the Ravens roster. The wide receiver unit has continued to be a problem despite having Bobby Engram, an outstanding position coach.

Mike Wallace is set to hit the free agent market but should be included in the team’s future plans. Turning to the draft could be an option for the Ravens, especially if Alabama wideout Calvin Ridley is on the board when they are set to pick in the first round.

It is also time to strongly consider selecting a quarterback to groom as Joe Flacco's future replacement. With a salary cap number of at least $24 million in each of the next three years, at some point, they have to move on because Flacco is not worth funneling such a large part of the salary cap to.

Defensively, the Ravens are fortunate that defensive end Terrell Suggs found the fountain of youth as he revisited his days as a double-digit sack pass rusher. Suggs finished with 11 sacks and four forced-fumbles and wants to build on that heading into the 2018 season.

With Suggs in place for next year and a steadily improving outside backer in Za'Darius Smith, Baltimore should be in good shape.

The biggest weakness remains at weakside linebacker. Patrick Onwuasor finished the year as the starter after Kamalei Correa was placed on injured reserve in late December. With GM Ozzie Newsome's fondness for prospects from his alma mater, Alabama, don't be surprised if linebacker Rashard Evans has his name called at some point when the Ravens are on the board.

Baltimore's roster is still well intact. Sprinkle in a playmaker at wide receiver as well as a breakaway running back and the offense will find some big plays again.

This year will be a big-time test for Harbaugh and company. Team owner Steve Bisciotti is desperate to return to the winning seasons that used to be a regular occurrence for his team.