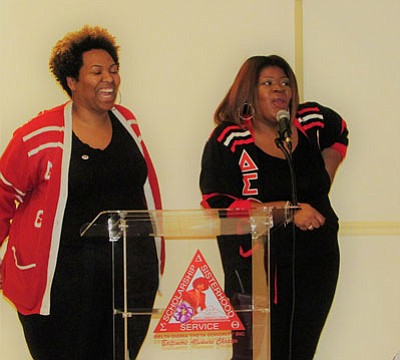 Over 200 participants are expected to attend this year’s M.A.D (Make a Difference) hosted the Baltimore Alumnae Chapter of Delta Sigma Theta Sorority, Inc. (Above, left to right) Adriene N. Boone and Krystle I. Myers this year’s conference co-chairs.

BALTIMORE — The Baltimore Alumnae Chapter of Delta Sigma Theta Sorority, Inc. is host to the M.A.D (Make a Difference) Girl Conference, a signature event within the award-winning Delta Academy youth program on Saturday, January 20, 2018 at the Delta Community Center on Springhill Avenue from 11 a.m. to 4 p.m.

Now in its 5th year, the conference is an invite-only activity for African-American girls in the Baltimore area. Organizers say the goal of the conference is to help young ladies between the age of 11 and 18 to make better choices that will not only shape their future but make a difference in the world.

“The conference is designed to empower young women to be the best they can be and to make a difference in their communities, this country, and the world,” said Krystle I. Myers, a lawyer who along with her friend, Adriene N. Boone, are co-chairs of the event.

“In the past, we have had presenters and workshops on self-esteem, cyberbullying, relationships, science, technology, engineering, art and math.”

Over 200 people are expected to attend this year’s conference, which will feature as many as 40 advisors.

“The conference has continued to grow in attendance— our first conference had approximately 75 participants, and this year we expect approximately 200 participants,” Myers said. “We continue to receive strong positive feedback from participants [who] were inspired by the conference overall and the speakers and workshop presenters. The girls love that they are able to see real life examples of positive African-American women who are making significant impacts in their careers and communities.”

Since the inception of the conference, organizers say they have been amazed at the enthusiasm displayed by the young participants.

For this year’s conference, organizers are using what Myers says is a more interactive model. They plan to begin the event with seven TED Talk-like presentations from seven different speakers. In the afternoon, participants will then be separated into groups based on their pre-selected area of interest. They will work together to creatively solve a problem facing the city, according to Myers.

Boone, who was raised in West Baltimore, attended St. Paul School for Girls before going to Temple University in Philadelphia where she graduated with a Bachelors of Business Administration with a concentration in Marketing. She obtained a Master’s degree in Marketing Management from the University of Maryland.

“My grandmother was my inspiration,” Boone said. “She was a teacher in the Baltimore City School system for 32 years and when she retired she still gave back to youth by volunteering in schools and being a Girl Scout Leader. Even though, she has been deceased for almost seven years now, people still come up to me and say things like ‘I became a teacher because of Mrs. Hyman.’ I learned how to give back from her and I just always want to make her proud.”

Myers says she has always been motivated to do her best to make her parents proud.

“They have sacrificed so much to support me in achieving my dreams and it has always been important to me to make sure they know their efforts are not in vain,” she said, adding that she’s also motivated to set a positive example for “my nieces and nephews and to be a positive role model for other brown girls who dare to dream big.”