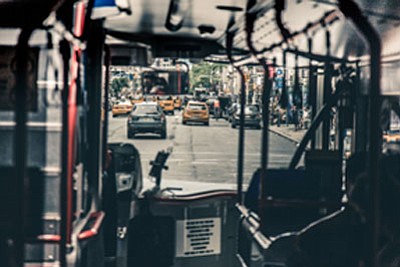 Self-driving cars might seem to render public transportation obsolete. But the opposite is true. Autonomous buses have already made their way onto streets. Gerrie van der Walt

Fiat Chrysler and BMW just announced plans to jointly develop self-driving cars. The move puts the automakers in competition with Google, Apple, and other car manufacturers that are also working on driverless vehicles. The question is when, not if, this is going to be commonplace.

Self-driving cars might seem to render public transportation obsolete. But the opposite is true. Autonomous buses have already made their way onto streets. And because Bus Rapid Transit tends to have dedicated lanes, the transition to driverless vehicles should be easier for public transit than for private transport.

The truth is that public buses, subways, trolleys, and trains will complement driverless automobiles by serving as our transportation network's high-capacity trunk lines. Automated chauffeurs may pick us up for the first mile of our journey, or drop us off after the last mile. But public transit will serve as the backbone of that multi-modal transportation system.

Over the past two decades, public transportation ridership has grown by 34 percent. Last year, Americans took 10.4 billion trips on public transit, or 35 million every weekday.

Those who use public transit don't miss driving. Typically citing convenience and cost, six in 10 riders prefer public transit to other modes of transport.

Americans are giving up their car keys because buses and trains fit seamlessly with the ride-sharing, car-sharing, and bike-sharing services that have revolutionized how we get around.

Consider a survey taken last year of commuters in Austin, Boston, Chicago, Los Angeles, San Francisco, Seattle, and Washington, D.C. Researchers surveyed 4,500 people about their use of public transit, car-shares, bike-shares, and rideshares. They then identified a subset that regularly uses several of these modes of transportation. Nearly six in ten of these "super-sharers" reported that more often than not, they travel on a bus or a train.

These variations of ways to get around— public transit among them— are allowing more households to go car-free, or at least car-lite.

Rideshare services and public transit are also complementary because people prioritize them at different times. In that seven-city survey of commuters, researchers found that Uber and Lyft are the most popular way to get around between 10 p.m. and 4 a.m., when buses and subways are typically closed.

Rideshare services and public transit in some cities are even working in tandem.

In Dallas, Atlanta, Los Angeles and Minneapolis, Uber has partnered with local officials to integrate ridesharing with real-time bus tracking in one smartphone app. In the future, such partnerships could yield seamless transfers, unified payment methods, dynamic route maps, and even lower transportation costs.

People now expect to get where they need to go on-demand. Public transportation services can meet that need by offering convenient, reliable, and ubiquitous service, both individually and in partnership with others.

It's important that they do, because a future with less driving creates healthier, wealthier, more sustainable communities. Taking public transit is 10 times safer than traveling by car. Those who rely on shared transportation are generally more physically active than their car-only counterparts. For most Americans, a car is the second-largest purchase they'll make; skipping ownership bypasses that expense. Plus, increased reliance on public transit reduces U.S. carbon emissions.

Technology may soon take our places behind the wheel and increase our reliance on public transportation in the process.

Richard A. White is a senior advisor with the American Public Transportation