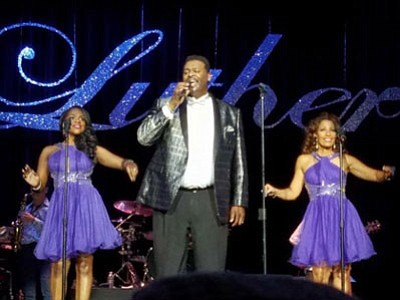 If listening to the radio isn’t giving you the musical fix you need, consider spending an evening with Luther Vandross. But, before you rally against the fact that Vandross died almost 13 years ago, allow yourself to be transported and attend the "Luther Re-Lives" one-night only performance at Center Stage on Saturday, January 27, 2018 featuring Alexandria, Virginia native William “Smooth” Wardlaw.

Before you argue that the late Vandross’ distinctive velvety voice is unmatched, take the time to just listen to Wardlaw. Deemed the “Fake Luther” by morning shown radio host Tom Joyner, Wardlaw has proven that he has the musical chops, talent and ability to emulate Vandross’ persona enough to sell out shows to the point of turning people away.

“I came to HATE; but fell in LOVE!” said Stephen Hill, Sr., BET’s former President of Programing. A fan gushes that it is an “Outstanding tribute to Luther Vandross. I could see it over and over again and still enjoy it better than the first time! Mr. Luther II rocked the house and so did his backups and the incredible band members. If you don't get to see them, you are really missing out— big time. They really give [it] their all and more!”

Luther Re-Lives, the brainchild of writer and producer Deginal Boykin, has been touring for nearly 20 years but has greatly grown in popularity in the past two and a half years.

“I had the best time. The show was entertaining and riveting. He sounded so good. I thought Luther was in the building,” said a fan of the concert.

Though not officially a Las Vegas show yet, the show has extensively toured the east coast and numerous islands, has been guests on the Soul Train Cruise and re-invited guests on the Tom Joyner Fantastic Voyage and Family Reunion cruises. With such engagements be sure to catch the Baltimore performance while you can.

Not everyone can cover the legend as we remember him or invoke the feelings of longing, yearning and memories of love lost and gained. But, Wardlaw, who has been performing the late legend’s songs since his high school talent show days, is able to emotionally connect with the audience as he sings many of Vandross’ iconic ballads such as “A House is Not a Home,” Here and Now,” and “Don’t You Remember/Superstar” transcending the room with seamless transformation into Vandross while adding his own style and flavor.

The show also boasts the talented Washington, DC-based seven-piece Sensation Band and the two Feisty Divas as background singers, who can each sing in her own right.

According to an online fan, “William, aka Luther, sang his butt off along with his two lady sidekicks! We screamed, danced and remembered Luther.”

“I am truly ‘Re-Living’ the experience of Luther. I LOVE them!” said Patricia Lacy, one of Vandross’ original background vocalists, who has fallen in love with Wardlaw as an entertainer and has performed in several shows with the group— talk about a seal of approval.

With the amount of buzz surrounding the Luther Re-Lives priduction, it would be a discredit to miss the show while it is in town. Just keep in mind that where Luther ends, Luther Re-Lives begins.