Vlad’s Man In The White House 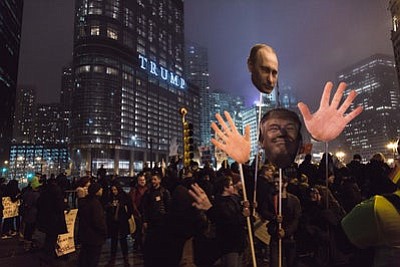 OK, if you are the brutal authoritarian ruler of Russia and you want more global power, what is your fantasy about your enemies in the United States, Canada and the European Union?

First of course, they fight amongst each other. Check.

Two, that the most powerful one, the US, has a ruler who looks up to you and is envious of your raw power to command obedience. Check.

Three, that the US becomes as corrupt as Russia. Check.

Four, racial, religious and national identity conflicts increase in your enemies’ countries. Get Trump to fan all those flames. Check.

Five, you get your U.S. puppet to cozy up to your buddy Kim Jong Un and praise him and then meet with him and agree to the very plan you have been proposing all along. Check.

Six, you get the stooge in the White House to impose tariffs on all friends and on China, starting a trade war that will hurt everyone else’s economy except Russia’s. Check.

Seven, make your boy back out of trade agreements that strengthen the U.S. economy. Check.

Eight, just for giggles, have the marionette mention that really, Russia should be back in the G-8, or the G-7, or the

I’m thinking Hollywood is working on this already. It’s going to be quite a movie. An (apparent) chik flick.

Trump is relentless in his anti-American moves, all under his false flag, “Make America Great Again,” as he calls CNN, MSNBC, National Public Radio, New York Times, Washington Post— all mainstream free press media staffed by writers and editors who understand and practice the honest, professional fact checking so disdained by Fox News— all fake news, according to him, the big bloat in the empty suit tweeting six impossible lies before breakfast.

Make America Fake Again. We are fast becoming friendless, pariah, the laughingstock of the world. If this is the America you want, большой! Bolshoy! Great! Your boy in the White House, the oafish, tweeting puppet of master string-puller Vladimir, is waiting for your further support this fall in our elections. Give Putin the extra power he craves and Vote Republican.

Dr. Tom H. Hastings is PeaceVoice Director and on occasion an expert witness for the defense in court.