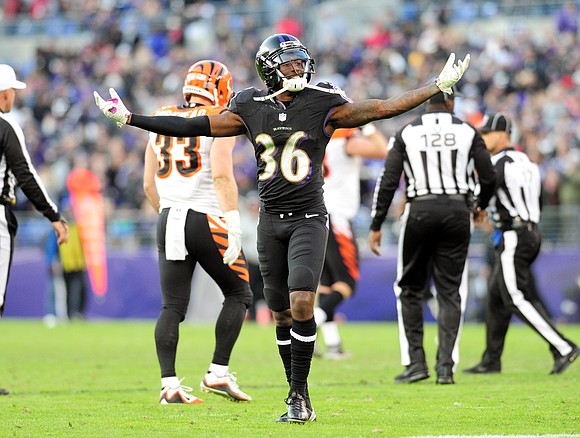 Baltimore Ravens cornerback Tavon Young celebrates after breaking up a pass in a game against the Cincinnati Bengals during the 2016 NFL season. Courtesy Photo/NFL.com

Third-year Baltimore Ravens cornerback Tavon Young will be one of the players to watch when the team reports to training camp in the coming weeks.

After being selected in the fourth round (104th overall) by the Ravens in the 2016 NFL Draft, Young took over as the nickel corner for Baltimore. He posted two interceptions as a rookie.

Young tore his ACL during OTAs in May last year and he was out for the season. Now, the promising young defensive back is looking to return to form.

“I feel great. I spent a lot of time in the training room in the off-season, the whole off-season, during the season, just working on my knee— running, getting it strong," Young said during a minicamp press conference. "Now, this is my first time playing football in almost a year, and I feel good, and I feel like I’m back to myself."

Getting back on the field and moving around during OTAs a year after injuring his knee is a sign that things have come full circle for Young. He is more than thankful to be able to play the game he loves.

“For the first time, it looked like— to me— he really got past the trepidation of coming back off the knee injury," Harbaugh said following a minicamp practice. “But I thought today he let it cut loose a little bit more and looked really good.”

Knee injuries and specifically ACL tears are a major injury, but the recovery is quicker now thanks to modern technology that offers a more effective rehab process. Fortunately for Young he had the luxury of time. The expectation was not for him to return last year, so Young was able to gradually work his way back.

"After I got hurt, I realized I had a lot of time to get healthy. I didn’t have to rush back into it or come back midway through the season," Young said. "I came back at comfort, and now I [can] just let loose. To be back out here with these guys is a blessing."

The Ravens posted 18 interceptions as a team with Young in the lineup in 2016. That tied them with the Chiefs and Chargers for the most in the NFL.

Without him last year, the Ravens finished with 22 interceptions which was tops in the league. Now with Young returning to the nickel corner spot and a more aggressive defensive coordinator in Don 'Wink' Martindale, the Ravens look to continue their excellence defending the pass.