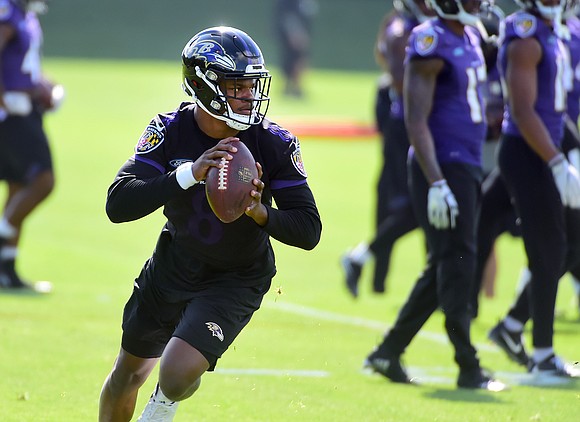 The Baltimore Ravens traded back into the first round of the 2018 NFL Draft to select rookie quarterback Lamar Jackson with the No. 32 overall pick. The Ravens offense has been in need of a jolt over the last few years.

Jackson's dynamic playmaking ability led to him winning the Heisman Trophy in 2016. He tortured opposing defenses both throwing and running with the ball while at Louisville. Now, his goal is to do the same in Baltimore.

"When they see my running ability, they see me make people miss in the open field; they just try to label me. I don’t want to say as an ‘athlete’ but at the same time, they could say, ‘He could play running back or receiver,’ or something like that," Jackson said during his first press conference in Baltimore back in April.

"That’s just a plus for me. I can throw the ball with the best of them like I always say. I can make any throw on the field, but I can bring something else to the table, and that’s dynamic running ability."

The evidence is already has started to surface already as Jackson has made numerous deep throws for touchdowns to wide receivers such as undrafted rookie free agent Jordan Lasley. The effortless flick of the wrist that Jackson uses to launch the ball down the field is reminiscent of former Atlanta Falcons and Philadelphia Eagles quarterback Michael Vick.

That is no coincidence. Jackson grew up watching Vick dominate football games.

"He’s been a big influence on me. My first Madden game was 2003, but I played with Michael Vick [in] 2004, and he was out of control," Jackson said. "Just watching him on a video game and watching him on TV and seeing what he did, what he brought to the table with his team, winning games for Atlanta, it was like, ‘Man, I want to do some of the things he did on the field.’"

Jackson's play has stood out to veterans on the Ravens already in camp. Veteran wideout Michael Crabtree called Jackson a 'baller' and said he plans to encourage the young quarterback to go out and make plays to prove doubters wrong.

Offensive coordinator Marty Mornhinweg worked with Vick in Philadelphia. He likes what he's seen from Jackson so far.

"He’s done an outstanding job up to date. He’s way ahead of the curve," Mornhinweg said in a recent press conference. "You can see on the practice field; it’s coming now. He’s getter better every day. He’s done a fabulous job here of improving every day becoming a pocket passer."

Jackson will get a chance to showcase his skills when the Ravens open the preseason at the Hall of Fame game in a couple of weeks.