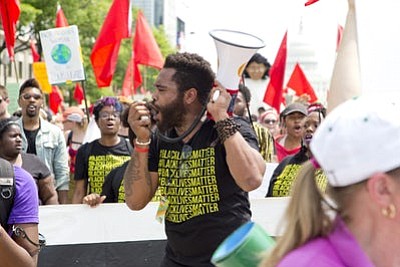 As the world commemorated the 50th anniversary of the assassination of the Rev. Dr. Martin Luther King, Jr., I reflected upon the legacy of the iconic civil rights leader, I was reminded of two columns I wrote years ago in the form of poems. Yes, I do have a poetic side that most of the public has not seen unless they have read my book, “Writing Wrongs: My Political Journey in Black and Write.”

The first column was written in January of 2005 titled, “Letter to Dr. King.” Please remember the context in which this piece was written. George W. Bush had just won a second term as president; Barack Obama was just sworn in as the new senator from Illinois; Bill Cosby was being vilified for his now infamous “Pound Cake” speech before a NAACP awards program in Washington, D.C.; the speech was about Blacks being more responsible for what happens in their lives.

The second column was written six years later, in 2011, and titled, “The State of the Dream.” In this piece, I was very critical of how blacks awarded the contracts to design and construct King’s statue on The Mall in Washington, D.C., to a Chinese sculptor and not an American; this is why I will never visit it—ever. They even imported the granite from China, even though they could have gotten the same quality of materials in the United States.

One of the most prominent sculptors in the U.S. is Ed Dwight, Jr. who just happens to also be a former Air Force test pilot and the first black to be trained as an astronaut. Why was he not commissioned to do King’s sculpture?

When people called King the “n-word,” it was not a term of endearment; it was a term of death, as in, “Kill the n—ger!” I am quite sure that Jesse Jackson never walked up to King and said, “Yo, what’s up my n—ger!?”

Now, you have blacks all over television, movies, and public spaces using the word in mixed company. Then blacks have the nerve to want to get angry when a non-black does the same thing. N--ga, puh-leeeze!

No one should be using the word.

Period. The very use of this word is an affront to everything King represented.

Another thing that would embarrass Dr. King, would be the blatant mistreatment and degradation of black women. When did it become okay to call our women bitches and hoes?

Or what about the way some young people dress? Do you really think King would have approved of us walking around with our pants hanging down to our knees or our women showing all manner of body parts at work, church and on the street?

To my white folks: I think King would be disappointed that insidious social engineering through programs like welfare systematically have contributed to the destruction of the black family and the emasculation of the black male. Some of these perverted programs have also had a negative impact on the rest of America.

America, with all the strides that we have made, continues to hand the blacks the same check returned with the words “insufficient funds” stamped on its face ever time they try to cash it.

God had already endowed us with these inalienable rights that were codified in the U.S. Constitution.

Yes, America has come a long way from where we used to be, but we still have a long way to go.

So, as I reflect on King’s assassination and his legacy, I can hear him telling both blacks and whites: “Boy, go get me a switch, because you have brought shame on America.” After we start crying from his love taps from the switch, I can then see him grabbing us in his arms and lovingly saying, “Now, go do better.”

Raynard Jackson is founder and chairman of Black Americans for a Better Future (BAFBF), a federally registered 527 Super PAC established to get more Blacks involved in the Republican Party. BAFBF focuses on the black entrepreneur. For more information about BAFBF, visit www.bafbf.org