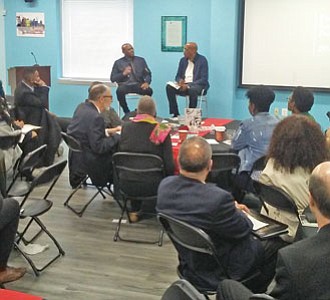 Celebrated actor Omar Epps with Center for Urban Families founder and CEO Joe Jones at the annual Practitioners Leadership Institute summit on October 20, 2018 in West Baltimore where Epps was the featured speaker. He engaged members of the community in a conversation about his newly released book, "From Fatherless to Fatherhood." Demetrius Dillard

Award-winning actor Omar Epps was the speaker at the annual Practitioners Leadership Institute (PLI) summit on October 20, 2018 in West Baltimore.

PLI, an initiative of CFUF, is a social service and community-based organization focused on developing practitioners working in the fields of family strengthening, workforce development and fatherhood.

Epps, known for his roles in timeless cultural films including “Love and Basketball” and “Juice,” was invited to discuss his new book, “From Fatherless to Fatherhood” and provide some valuable insight to local community members.

Epps’ new written work is an in-depth memoir of his upbringing as a young black male without a father, and the obstacles he overcame to become a successful and an involved father of three children.

“I think a lot of us— men and women— can relate to growing up without a parent and the effects that [has] on you,” Epps told the Baltimore Times. “Hopefully the book can be used as a tool of inspiration. And one of the main messages that I speak about is power of choice is always at our disposal. So it doesn’t matter what choices a person makes, a man makes— even if he had gone astray from fatherhood, he can always make the choice to get back on track.”

During the hour-long discussion, which was led by Joe Jones, the CEO and founder of CFUF, Epps covered a wide array of topics, from his navigation through the film industry, to life with his wife and three children, to various themes in his book, along with the journey of writing his book.

“I think my ultimate goal for writing this book ‘Fatherless to Fatherhood’ is trying to spark a change of narrative in our community,” Epps said to the audience of about 30 in a conference room at the CFUF.

With eloquence, grace and poise, Epps also stressed the necessity for black fatherhood and the challenges associated with being a father.

The Brooklyn, New York, native spoke openly about the deep-seated resentment he once had toward his father, a man whom he says never made a concerted effort to establish any type of relationship with him. But instead of letting the bitterness cultivate and intensify, Epps says he used that negative energy as fuel to change the narrative, to become successful, and to start and raise a beautiful family— ultimately showing his father he “made a grave mistake.”

A panel discussion addressing the current and changing funding landscape in Baltimore with some of the city’s most noteworthy corporate and community-based philanthropists, including Maryland Senator-Elect Antonio Hayes, John Brothers with the T. Rowe Foundation and Tomi Hiers of the Annie Casey Foundation was also on the agenda.

The PLI Fellows (Boys and Men of Color Academy) were recognized and given awards during a networking brunch. The award recipients were comprised of grassroots leaders representing Baltimore’s change agents who are working to support boys and men through programs offering mentoring, media, health and wellness, entrepreneurship, self-development and education.

Jones says he brought Epps in because he felt the message conveyed in his book “From Fatherless to Fatherhood” was congruent to what he and his organization want to communicate to the Baltimore community.

“What we do here, programmatically, particularly around our fatherhood work, we’re always looking for someone who has the experience and capacity to bring that message and to talk about it in a very authentic way,” said Jones, a fatherhood program coordinator. “And, with Omar, he has a new book— so it’s apropos for what we wanted to do. What we didn’t anticipate is how authentic he would be, and how much he would resonate with the audience.”

Epps brought his mother, Bonnie Maria Epps, whom he acknowledged as one of the most influential figures in his life.

“I wouldn’t be here if it wasn’t for my mom. I have an incredibly strong, loving mom who instilled a sense of self-worth in me at a very, very young age. And that’s the one thing that’s guided me through my life,” Epps said.

At the end of the discussion, Epps answered questions from the audience and expressed sentiments of optimism. He also signed books and took pictures with conference attendees.