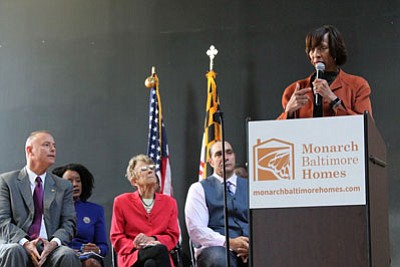 Monarch Academy Baltimore and The Children’s Guild have launched a Community Revitalization Initiative in partnership with the Coldstream Homestead Montebello Community Corp.

The partnership was formed to purchase and renovate vacant row houses as part of Monarch Academy Baltimore’s effort to support affordable housing and reinvest in the community.

“The Monarch Academy Baltimore Community Revitalization Initiative is important because it will preserve and reinvigorate one of Baltimore’s historic neighborhoods, making it a great place to live, learn, work and play,” said Steve Baldwin, the chief growth officer for The Children’s Guild, a nonprofit that serves children, families and child-serving organizations.

The Children’s Guild is dedicated to transforming how America educates and cares for its children through education, behavioral health and national training and consultation services.

“For 50 years, the Coldstream-Homestead-Montebello neighborhood has had scores of abandoned homes. The initiative reverses that trend by providing affordable housing for our teachers, families and neighbors, offering completely renovated homes for below-market value,” Baldwin said.

The project is an integral part of Monarch Academy Baltimore and The Children’s Guild’s commitment to rebuilding the community.

“Another facet of the project bears mentioning is that children who live in substandard housing often are not available mentally and emotionally for learning. This is a practical way for Monarch Academy to address that issue for our students, while helping the community,” he said.

The Children’s Guild purchased five row houses in the Coldstream-Homestead-Montebello community. The organization has five additional home purchases scheduled to close within the next month and as many as 30 more in the future, according to a news release.

The homes will be completely renovated with modern, open floor plans, new appliances, plumbing and wiring, new roofs and flooring and LED lighting.

The Children’s Guild, which is also partnering with K4 Associates-Nonstop Construction, The Debbie Cohen Team of Long and Foster Real Estate, Partners for the Common Good Loan Fund, and Baltimore City for the project, will sell the renovated homes at below market value starting at $100,000 and reinvest profits into Monarch Academy and the community.

“This is a forward-thinking, progressive partnership between Monarch Academy, the community and local government agencies committed to transforming and rebuilding a wonderful but challenged community,” said Mark Washington, executive director of Coldstream Homestead Montebello Community Corp.

Additionally, Monarch Academy Baltimore will integrate the initiative into the school’s curriculum, which will allow students to engage in project-based learning using real-world experiences in the community and coordinated academic content throughout the year to help accelerate skill development.

Once the homes are built, anyone can purchase them, according to Baldwin.

“I cannot say enough about the working relationship we have had with Mark Washington and the other leaders in the Coldstream-Homestead-Montebello community,” he said. “They have helped us understand the needs of the community and shown us how to become part of the community. Their support has been very strong.”

Monarch Academy Baltimore and The Children’s Guild have launched a Community Revitalization Initiative in partnership with the Coldstream Homestead Montebello Community Corp.