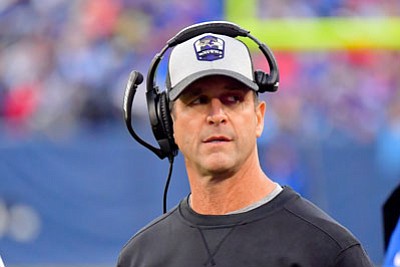 After compiling a 95 - 66 career record since taking over as the Baltimore Ravens head coach in 2008, John Harbaugh finds himself on shaky ground. The rumor mill is buzzing with thoughts of letting Harbaugh go.

The NFL is a results-oriented business and lately Harbaugh's Ravens have fallen short. Never mind the 10 playoff wins which are second most by any head coach since 2008. Delivering a Super Bowl XLVII win along with two AFC North division championships and three AFC Championship game appearances may not be enough.

Baltimore's three-game losing streak has team owner Steve Bisciotti fuming. Harbaugh isn't fazed by it. He is going to keep plugging away.

“I’ve never been somebody that worried about keeping a job. I feel really good about the way this team has been coached for the last 11 years,” Harbaugh said.

A big part of the problem is an anemic offense. Now, Harbaugh is trying to balance staying loyal to quarterback Joe Flacco and infusing the dynamic playmaking ability of Lamar Jackson.

Harbaugh wants to see Jackson get more snaps on game day. It would benefit the Ravens if Jackson were allowed to throw the ball rather than be a glorified running back.

However, quarterbacks are finicky about coming off the field when the offense is out there. Any starting quarterback wants to be the captain of the ship. That's the dilemma the Ravens have encountered.

"You want to keep your offense in a rhythm and keep your quarterback on the field in a rhythm but you have a playmaker and you don't want to just have him run the ball all the time. He's not a running back— he's a quarterback," Harbaugh explained.

Fortunately, the bye week comes after a tough 23 - 16 loss at home to their bitter rival Pittsburgh Steelers. Losing at M&T Bank Stadium is never a good thing and how flat the team played makes matters even worse.

"I think our guys have been hard at work. It will be good for us to get off our feet and get our legs back. I'm looking forward to that. I know we're better off resting at this point," said Harbaugh.

It's unlikely that Harbaugh will be relieved of his duties as head coach but a poor outing after the bye week against the Cincinnati Bengals won't help much.