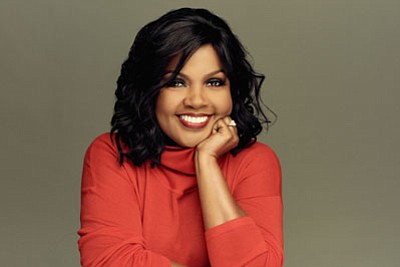 CeCe Winans will perform with the Baltimore Symphony Orchestra and the Morgan State University Choir in a rousing gospel Christmas program of holiday favorites on Friday, December 21, 2018 at the Joseph Meyerhoff Symphony Hall at 8 p.m. Cameron Powell

Renowned gospel singer and 12-time Grammy Award-winner CeCe Winans is scheduled to join the Baltimore Symphony Orchestra and the Morgan State University Choir for a rousing gospel Christmas program of holiday favorites on Friday, December 21, 2018 at the Joseph Meyerhoff Symphony Hall. The 8 p.m. performance promises to feature some of Winan’s biggest hits and select tunes from her brand new Christmas CD, “Something’s Happening! A Christmas Album.”

“Baltimore can come to the show expecting a great time. We’re going to have fun and sing some of the old stuff and some of the new stuff,” said Winans, whose trophy mantel also contains a staggering 23 Dove Awards and seven Stellar Awards.

“It’ll be Christmas time— the time of year that gets me excited because it’s fun, refreshing and it comes around every year at a time when we all need it,” she said.

This is not the first time that Winans has performed in Baltimore and based on her enthusiasm for Charm City, it likely won’t be the last.

“Baltimore has supported my family and I for years,” Winans said. “You come out, you sing with us, you know the stuff and it’s like family. There’s always a smile on our faces when Baltimore is part of the plan.”

The eighth of ten siblings, Winans rose to international fame with performances and recordings with her brother, BeBe.

Their first album, “Lord Lift Us Up,” was released in 1984 and several more would follow, including the massively successful, “Different Lifestyles,” in 1991.

Winans then launched a solo career and, in 1995 released her first project without her brother called, “Alone in His Presence.” That was followed by other successful CD’s including “Everlasting Love,” “His Gift,” and “Alabaster Box,” all of which led to several gold and platinum certifications along with a Grammy and several Dove Awards.

In 2016, Winans became a member of the Artist Committee for the prestigious Kennedy Center Honors.

For her latest CD, Winans again tapped her son Alvin Love III, to produce. It features singles like “Something’s Happening,” “Giving Season,” and classics like, “Feliz Navidad,” and “Silent Night.”

“Earlier, my son produced a record that won two Grammys and we got back together to produce a Christmas album with full orchestration which I love and it’s really beautiful and lots of fun,” Winans said.

While there is lots of work involved in creating new music, Winans says she believes her career and her ministry— she pastors a church with her husband— are a calling for God.

“It’s about understanding that everybody is important.”

Music has always been an integral part of Winans’ life. She began singing at the age of eight and by age 15, she was already in a recording studio making music. She also starred in her family’s television show.

“I love music and there’s so much more to do and so much more to say and that’s why we keep going,” Winans said. “There were times when I’d say, ‘I’m done.’ But, I always knew that this is what I was called to do,” she said. “It was my purpose. Even in challenging times, I know I was created to do this.