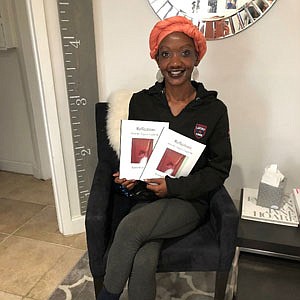 Kimberly Brown says she has always shared the journey of others in her reporting, whether it was an obstacle, new venture or victory. Now, the former Baltimore Times journalist has written a new book about her own journey.

While the title, “Reflections – What Ms. Angelou Taught Me” is certainly an ode to the late poet Maya Angelou, Brown also pays tribute to her parents in the opening of the book.

“To my mommy and daddy, you both have stuck by me no matter how outlandish my dreams or wild my beliefs. I love you,” Brown writes in the forward to “Reflections…”

And, while telling the stories of others has been a major part of her work as a journalist, Brown decided it’s time to tell her own story.

“Along the way I neglected to share the truth of my own path so as a way to open up about challenges which I endured, the book was written,” she said. “I am a private person who failed to realized that some of my adversities could possibly offer encouragement.”

In telling her story, Brown says she drew strength from Angelou, the famed poet, author and civil rights activist who died in 2014.

“What I have learned from observing Maya Angelou is that there’s strength in owning who you are and being true to self. Also, as a woman of color, we essentially hold the key to recognizing our own worth as well as hold value to who we are and what we offer into the world,” Brown said.

Growing up, Brown recalled watching the ABC Television presentation of “Roots,” the gripping true story of the enslaved ancestors of author Alex Hailey. She says the book and television series also helped to shape her as a writer.

“Some people, like myself, embraced the story and wanted to learn more, while others who still to this day, believe slavery has no connection to the mindset or behaviors we experience in our community,” Brown said. “I feel whenever we fail to acknowledge a timeframe in American history it can affect a culture moving forward.”

Brown also notes the importance of being humble.

“After going through but so many challenges along your path, if we’re not humble already, life will humble you,” she said. “I don’t understand what’s the big turn off about being humble. Although, I do understand we should definitely be compensated for our worth or involvement in work related projects.”

As far as awards and accolades, Browns says she believes just having an opportunity to keep doing what she loves and being able to reach higher goals is in itself fulfilling.

“Of course, at some point there is a desire to retire so to do so fruitfully is a reward within itself,” she said.

Brown also hopes that anyone who reads “Reflections” will understand regardless of their background or circumstance that anyone can succeed.

“There will be challenges as well as obstacles along the path, but just continue to move ahead with faith and belief in your gifts,” she said. “I want readers to feel encouraged and inspired that they can accomplish or pursue what is in their hearts to achieve despite what they may have endured in the past.”

“Reflections – What Ms. Angelou Taught Me,” is available for sale at: https://www.barnesandnoble.com/w/reflections-what-ms-angelou-taught-me-brown/1128969065?type=eBook.