Lamar Jackson gives Ravens a glimpse of the future 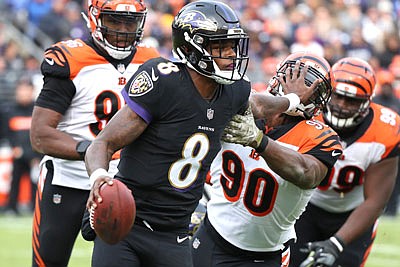 Ravens quarterback Larmar Jackson made his first NFL start on Sunday, November 18, 2018 against the Bengals at M&T Stadium.

The Baltimore Ravens traded back into the first round of the 2018 NFL Draft to select former Louisville quarterback Lamar Jackson. The selection was the last first-round pick that Ravens GM Ozzie Newsome will make in his career.

Judging from what Jackson was able to do against the Cincinnati Bengals last week, Baltimore has a bright future. The NFL is moving towards a league that places more of an emphasis on scoring.

Dynamic playmakers such as Jackson are electrifying fans on game day with their highlight reel worthy performances.

Baltimore desperately needed a win last Sunday to stay on pace with the other teams fighting for the final wild card spot down the stretch. Starting quarterback Joe Flacco is sidelined due to a hip injury and wasn't able to play in week 11. Jackson made his first NFL start in place of Flacco last Sunday.

The Cincinnati Bengals have been a thorn in the Ravens’ side over the years. Jackson's 150 passing yards and 117 rushing yards pushed Baltimore to a 24 - 21 win over their division rivals.

Logging 27 rushing attempts is far from the conventional way to use a quarterback. However, Jackson's ability to run the ball is rather unique. He is also a dangerous passer.

Jackson's style of play has evoked comparisons to former Atlanta Falcons and Philadelphia Eagles quarterback Michael Vick. Ironically, Vick was pretty vocal about the way the Ravens used Jackson, saying it isn't likely to be repeated.

"That game plan yesterday will only exist yesterday. They'll never be able to go out and duplicate that again," Vick said on FS1 show Speak For Yourself.

"It's going to be eight-man boxes from here on out. This will give Lamar Jackson the chance to work on becoming a better passer. Next week, he'll have to go out and pass the football, then you'll be complimentary with the run game— 27 runs is too much. The focus has to be on getting better as a passer."

Some of the Bengals players came away pretty impressed with Jackson. His style of play puts a different form of stress on defenses.

"It's like facing two different offenses. Joe Flacco, he just stands back there and isn't very mobile but he throws the ball hard. This guy [Lamar Jackson], is very unpredictable," Bengals linebacker Vontaze Burfict said.

"It was totally different. A running quarterback who is a dual threat...pass and run. It makes you play smart. You don't know whether he's rolling or not. It's a guessing game for the most part on things like that," cornerback Dre Kirkpatrick added.

"This is was the most amazing performance of the week. It was Tim Tebow with an even greater arm," Schrager said on the Monday show.

The future is bright for Jackson and the Ravens. Flacco's injury may allow Jackson to start a few more games in the coming weeks. It will be interesting to see how defenses adjust to Jackson's dual-threat ability and how Jackson adjusts in return.

"This guy is a great quarterback already," Head Coach John Harbaugh said. "And he's just going to get better from here on out."