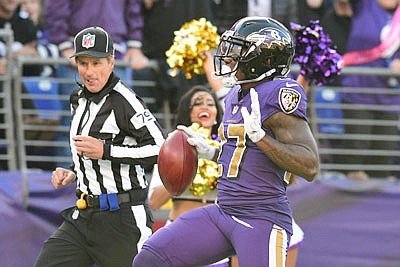 Ravens return man and Baltimore’s own Cyrus Jones celebrates after scoring on a 70-yard punt return against the Raiders at M&T Bank Stadium on Sunday, November 25, 2018. Courtesy Photo/NFL.com

When a football player scores a long touchdown, announcers and analysts will occasionally refer to it as a house call. Perhaps, no situation was more fitting of being called a house call than Baltimore Ravens cornerback and return specialist Cyrus Jones' 70-yard punt return for a touchdown against the Oakland Raiders on Sunday, November 25, 2018 at M&T Bank Stadium. Fittingly, Jones held his hand to his helmet as if he was using the phone, as he walked to the back of the end zone after his touchdown.

Before excelling at the University of Alabama and being selected by the New England Patriots in the second round of the 2016 NFL Draft, Jones was a standout wide receiver and running back at Gillman High School in Baltimore.

Now, Jones is ready to build on scoring his first NFL touchdown and become a key contributor for his hometown team. The road has been far from easy for Jones. He tore his ACL in the final preseason game of the 2017 NFL season and was placed on injured reserve.

The Patriots waived Jones on September 1 this year, and the Ravens picked him up two days later, adding him to their practice squad. New England re-signed Jones from the Ravens' practice squad later that same month but released him in October. Jones' home team came calling again and he has been on the 53-man roster ever since. His perseverance paid off when he showed a flash of the brilliance that led to him being taken 60th overall in the 2017 draft.

"To do it in Baltimore, that's a lifelong dream. In front of my hometown, it's an unbelievable feeling," Jones said about his first NFL touchdown. I've been through a lot. I can't put it into words. I'm going to sit back and relish it then get back to work next week."

Cornerback is a position that requires a great deal of self-confidence. Jones was able to regain his moxie after his punt return and parlay that into solid play as a nickel cornerback.

"It feels good to get back into the end zone and to feel like I got my swagger back after everything I've been through over these last couple of years," Jones explained. "I knew it would happen eventually. It gave me time to learn the defense more. Timing is everything and I'm going to just make the most of my opportunities."

Ravens head coach John Harbaugh preaches to his players about stacking good days. Sunday's 34 - 17 win over the Raiders was a good day for Jones to build on. The victory will feel good for Jones but he must quickly tuck it away and get ready for the next game.

If defensive coordinator Don Martindale doesn't have cornerback Jimmy Smith shadow the Falcons' top pass catcher, Jones may get to go against one of the best wideouts in the league— quite a reward for finally earning a spot in the defensive back rotation.