Baltimore Bakery Opens To Much Fanfare 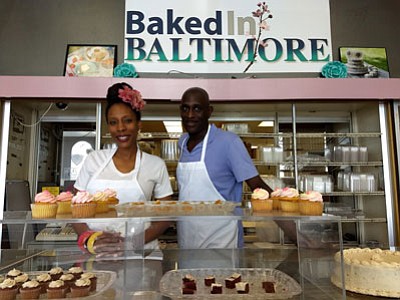 In the run up to the grand opening of her new “Baked in Baltimore” shop, lawyer and entrepreneur April Richardson wondered what would happen when she and partner Derek Lowery opened their doors at a location that was previously owned and operated as a Jewish bakery.

“It was absolutely insane,” said Richardson of the September 22, 2018 grand opening at 6848 Reisterstown Road in Pikesville, the location where Goldman’s Kosher Bakery operated for decades.

Instead of a having to bake just a few dozen of “Baked in Baltimore’s” signature sweet potato cakes and pies, Richardson says she stopped counting after more than 400 people, including Baltimore Mayor Catherine Pugh, showed up to support the new dessert specialty shop.

“I thought we’d slide into the city and get away with baking a couple of dozen pies and cakes a day but the first week has been crazy,” said Richardson, a Baltimore native who once worked as a lawyer for a lender that foreclosed on homes and businesses.

Featured in the Business Journal last year, as the woman who “built a $1 million cake shop,” Richardson eventually switched sides to help people avoid foreclosure. She worked on a panel enlisted by then-Governor Martin O’Malley and alongside then-state Senator Catherine Pugh to create new foreclosure laws.

While helping those victimized by foreclosure and mortgage fraud, Richardson encountered Lowery, who needed help to save his bakery in Prince George’s County.

“There was something about him, and I really wanted to help,” Richardson said. “I called the landlord who was on a train and asked her to stop the eviction and she asked why she should. I told her that I know how to get things done and she said, ok, but on the condition that I join the company,” she said.

After consulting with her son, Richardson got her sister to quit her job and also come aboard. Along the way, Richardson landed deals with retailers such as Wegmans and Safeway grocery stores; Starbucks; Nordstrom; and QVC.

The business has succeeded ever since, culminating with opening a location in Baltimore.

At the grand opening of Baked in Baltimore, she says that Mayor Pugh spoke to the crowd about not just the first day of the bakery, but the importance of sustainability.

“She left Ray Lewis’ parade and spent at least an hour with us and talking to the crowd,” Richardson said.

At one point, the crowd at the grand opening had gotten so large, Richardson said old classmates she hadn’t seen since the 1990s, volunteered to “jump behind the counter and help out.”

“I think the grand opening was so huge because people were so proud to have a black company in that community. It had been a community where black businesses had not traditionally been,” she said.

However, what stood out most for Richardson is what she believes was a message she received from her two late grandmothers.

“A 92-year-old woman named Geneva Denton walked up to me at the grand opening and said that she needed to talk to the owner,” Richardson recalled. “I said, ‘what if I told you that you were talking to her?’ She said she was so happy to have us in the city and that we were making Baltimore proud, and black women like her proud. She said she saw the crowd and came over.

“So, this 92-year-old named Geneva Denton had delivered this message, and I said we have to make sure we take care of Baltimore. It’s not just about the grand opening, but what you do after you’ve opened.”