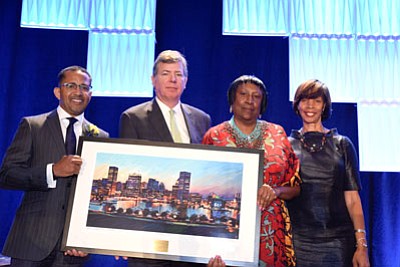 As founders of The National Great Blacks in Wax Museum, Dr. Joanne Martin and her husband, Dr. Elmer Martin, were always cognizant of the importance of having a dream fulfilled.

Their dream and vision led the couple to use the money they saved to buy a house to purchase wax figures, which they carried around to schools, churches, shopping malls and many other places where they would set up an exhibit.

A short time later in 1983, the couple opened a storefront museum with 21 wax figures. Today, the museum counts as America’s first wax museum of African American history and culture that features more than 150 lifelike was figures. It stands among the nation’s most dynamic cultural and education institutions and it’s among the reasons why Baltimore continues to attract millions of tourists each year.

It’s also a primary reason that Dr. Joanne Martin is the 2018 recipient of The William Donald Schaefer Baltimore Visionary Award from Visit Baltimore.

“The award means that Visit Baltimore, which is responsible for promoting tourism in this city and creating opportunities around the nation and the world to bring tourism to Baltimore, recognizes the role that Great Blacks in Wax plays in all of that,” Dr. Martin said.

Presented on September 25, 2018, at the Hilton Baltimore Hotel, The William Donald Schaefer Visionary Tourism Award “is reserved for a select group of visionaries whose leadership and commitment to growing Baltimore has lifted all residents up and strengthened Visit Baltimore’s ability to sell and promote the city as a great destination,” said Al Hutchinson, the President and CEO of Visit Baltimore.

“This year, we wanted to recognize Dr. Joanne Martin, who had a vision over 30 years ago and continues to expand and grow that vision today,” Hutchinson said.

During the ceremony, Hutchinson cited a New York Times article that glowingly reported on the viability of Baltimore’s tourism and the attractiveness of the city’s African American story. The article called The National Great Blacks in Wax Museum a “museum like no other.”

“Those kinds of things are very, very important and Visit Baltimore recognized that and recognized that Great Blacks in Wax is at the heart of African American tourism in this city,” Dr. Martin said.

As proud as she is of those facts and the award, Dr. Martin says what stands out for her is that the museum is in the heart of an African American community. “Where naysayers said nobody was going to come and we’ve been there for decades,” she said.

Bestowing the award on Dr. Martin was a no-brainer, Hutchinson added.

“Dr. Joanne Martin is the founder of one of America’s most dynamic cultural and educational institutions that we should all be proud is right here in Baltimore City,” he said.

“This past year, her institution joined us in celebrating the tremendous bicentennial of Frederick Douglas’ birth by commemorating a new wax figure in his honor.

“Dr. Martin and The National Great Blacks In Wax Museum continue to move forward with aggressive plans for a transformational expansion of the museum’s campus. We thank Dr. Martin for her devotion to Baltimore and look forward to watching her museum educate and enlighten visitors for years to come.”