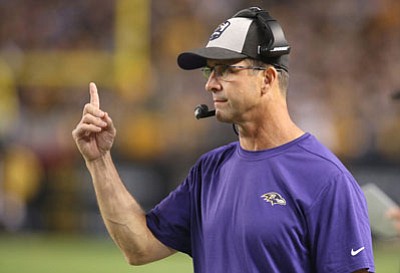 Ravens head coach John Harbaugh signals a play onto the field during the team’s 26 - 14 win over the Steelers at Heinz FIeld on September 30, 2018. Courtesy Photo/NFL.com

The Baltimore Ravens pulled off a convincing 26 - 14 win over the Pittsburgh Steelers in week 4. Beating their division rivals on the road was a major coup for John Harbaugh and his team. After the game, Harbaugh couldn't deny the significance.

"It's a big deal because the road runs through Pittsburgh the last couple of years to win the division. You have to win division games to win the division. It's the Steelers. We haven't beaten three games in a row, three years in a row there. To go up there and win, it means a lot to us. We needed a win and to be 3 - 1. Now, we just have to go try and get the next win. That's the focus here as a team," Harbaugh explained during his post-game press conference.

The win was even more significant for safety, Eric Weddle who before Sunday was yet to beat the Steelers as a member of the Ravens.

"This ain't the same Ravens," Weddle said. "We talk about it all of the time. You don't become a true Raven until you win in Pittsburgh, so I have officially become a Raven!"

Quarterback Joe Flacco felt like Baltimore could have scored more than the 14 points they put up in the first half. The Ravens controlled most of the first half but turned the ball over when Alex Collins fumbled two yards shy of the end zone.

Now the Ravens turn their attention to the Cleveland Browns as they look for another win over an AFC North opponent. Although the Browns have a losing record, Harbaugh is not taking them lightly.

"We got to work to move our focus to Cleveland. There's a lot of work to do to get ready for them and their different quarterback situation and all of the things they do schematically which is quite a bit," Harbaugh said. "They have a good coaching staff. It will be a challenge and an opportunity to go up there and try to get a win. Their fans will be really loud so we will have to prepare for that."

The Browns have one of the NFL's best receivers in Jarvis Landry along with an up-and-coming rookie in 2018, fourth-round pick Antonio Callaway. Baltimore will need their secondary to be at its best when they face these two dynamic playmakers. Fortunately for the Ravens, top cornerback Jimmy Smith returns after being suspended the first four games of the regular season due to a violation of the NFL's personal conduct policy stemming from domestic violence accusations.

Harbaugh says Jimmy Smith arrived at the Ravens' facility at 8 a.m. on Monday and got a workout in. He didn't give a definitive answer regarding Smith's return although it's likely the eighth-year cornerback will be ready to make his season debut on Sunday.

"If he is in shape and practices well, we will evaluate that as we look at him in practice," Harbaugh said. "It's going to be great to have all of those guys that are good cover players back. It's tough to complete balls against those guys. We can play any coverage we want— man or zone, it gives us a lot of options that we can do on defense."

After a 3 - 1 record, the season appears to be off to a good start for the Ravens. Next week could yield another victory in the win column, as they try to keep pace with the Cincinnati Bengals atop the division.