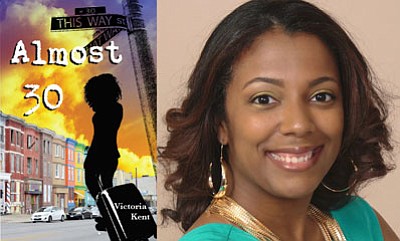 BALTIMORE — Baltimore native Victoria Kent has fulfilled her dream of becoming an author by writing and releasing her debut novel, “Almost 30,” a fictionalized memoir about an African American millennial living in Baltimore.

Set in Baltimore, “Almost 30” is a contemporary story of Sawyer Jenkins, an African American millennial woman on the verge of turning 30 who is attempting to maneuver through societies’ pressures of adulthood, financial instability, still living at home with family, job stagnation, men or lack thereof, and the physical transformation of her body.

As Sawyer attempts to “adult” she dissects the world and her purpose while dispelling stereotypes placed upon black millennials, like her.

“I chose to write this type of book because I was feeling like maybe I failed at life,” said Kent. “People were incessantly bombarding me with questions like when was I going to settle down and get married, have children and purchase a home. When I spoke to other millennials, I realized I was not alone. Many of us were being asked these same types of questions and coping with many of the same issues.”

Kent attended St. Timothy’s High School and later graduated from Loyola University with a bachelor’s degree in English. Her love for writing began at the age of five when she began reading and writing poetry and short stories. When she’s not writing Victoria volunteers with the Baltimore Guardian Angels and is an “Investigative Discovery” addict. Almost 30, is her first novel. She names Terry McMillan, Issa Rae, Kevin Shird, and Omar Tyree as some of her

favorite authors because of the honesty in their writing and that they write about life in an urban inner city.